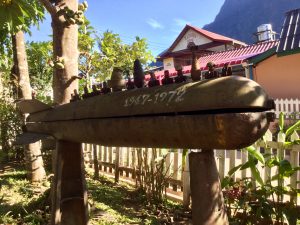 An unexploded US bomb, with grenades, used as a yard ornament in Maung Ngoi, Lao.

For the past 10 days or so we’ve been working our way back towards civilization down the Ou River (Nam Ou), from the quiet and rustic boat landing of Hat Sa to the busy tourist mecca of Luang Prabang. In between we found a spot that was just right– beautiful scenery, good restaurants…and unexploded American bombs used as yard ornaments.

You used to be able to boat pretty much the entire length of the Nam Ou, all the way to where it joins the Mekong, just above Luang Prabang. It would probably have been a two-day trip, maybe a little more. But that was before the dams. There are eight dams either built or in progress on the Nam Ou, and nearly two dozen more on other rivers in Lao, including a couple on the Mekong, with more planned. 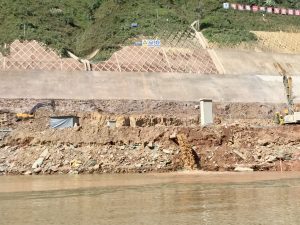 Chinese-built dam under construction on the Ou River, Lao.

The Lao government has aspirations of being the “battery of Southeast Asia”, supplying its neighbours with hydropower. There has been plenty of controversy over the construction, both ecological and economical. The dams disrupt the flow of the rivers, the migration of fish and flow of nutrient-rich sediment. Thousands of villagers have been displaced. Lao itself cannot afford to build the dams, and is partnering with China both for construction labour and expertise, and for financing.

For us the dams were an inconvenience, but also a sign that change was coming. We pay closer attention to the experiences we have in places like this, knowing that soon they will be a thing of the past.

We left Hat Sa in a long, narrow boat, a bench down each side. The boat was full, packed with villagers returning to their settlements downstream along the river, usually carrying supplies of some sort. Downriver a passenger got on carrying a puppy in a box, just its nose sticking out. It was put in back with the rest of the cargo and occasionally howled for attention as we motored along.

Three hours later we came to the first dam. We got out and continued down the river in the back of a pickup, around the first dam, then two and a half hours on a bumpy dirt road, past another dam in progress.

After a couple of night’s rest in a town called Maung Khua, we continued by boat towards another small riverside town called Maung Ngoi, passing yet another dam in progress. The dam construction, with the mountainsides scrapped away and covered in concrete was in jarring contrast to the dense jungle covering the river banks in the untouched areas.

Limestone cliffs along the Ou River near Maung Ngoi, Lao.

As we traveled downriver the hilly landscape changed and the skyline became dominated by rugged, spectacular limestone peaks, covered in foliage, and white cliffs rising up from the edge of the river.

When we reached Maung Ngoi we quickly decided it was a good place to park for a few days. It is still a village, with basically just one dirt street, but it is well on its way to transitioning to a backpackers hotspot. There are a number of decent guesthouses and restaurants. And the scenery is spectacular. 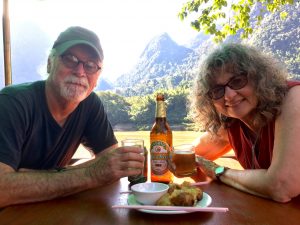 As idyllic as it is now, it wasn’t always so peaceful. During the later years of the Vietnam war, the late 60s to early 70s, the US bombed northeastern Lao heavily, trying to disrupt the flow of soldiers and supplies sent south along the famous (or infamous) Ho Chi Minh Trail by the North Vietnamese. (Actually, there was no one trail, but rather a network of camouflaged routes that ran through parts of Lao into Cambodia and South Vietnam.)

During the bombing the villagers near Maung Ngoi would take refuge in caves in the limestone cliffs. Further south the local government moved into a large cave and even operated a bank from there, in addition to sheltering people and storing supplies and ammunition.

We took a boat to the next town, then a bus from there to Luang Prabang, past a couple more dams. Luang Prabang is a UNESCO World Heritage site, and has become increasingly popular with tourists who demand a certain level of comfort. In the past decade plenty of posh hotels and guesthouses have been developed, but there are still enough modest but adequate places for budget travellers, often parts of homes with a few rooms for rent.

In spite of the gentrification, the bloom of tourist agencies selling package tours and a surplus of taxi drivers offering helpful suggestions of local attractions, Luang Prabang still has plenty of old French colonial charm and a laid back Mekong attitude.

That is all the time we have for Lao for this trip. It will be changing over the next few years. In addition to the dams, the Lao government, in partnership with China, will be building a high-speed railway down from southwestern China. There is both good and bad to the railway project, and it remains to be seen which will dominate.

When you get on a bus and see that the only amenity is complementary barf bags, you know you are probably in for an interesting ride, and quite likely an uncomfortable one. It seems like you can’t have the first without at least some of the second. The key is the ratio of interesting to uncomfortable. As we bounced and swayed our way north towards Lao’s remote northern region over a rough and winding road, I kept thinking about that ratio. We traveled through verdant forests, past hillsides covered with rubber trees and banana plantations, and beautiful fields of beans … END_OF_DOCUMENT_TOKEN_TO_BE_REPLACED

Most of the past week we have spent in a state of pleasant lethargy (which only partly explains the gap since my last posting). We made it as far south as we could go in Laos, to an island in the Mekong River. The island, Don Khon, is one of a group called the 4000 Islands. The name may be accurate, at least in the dry season when the river is low. But only a handful of the islands are big enough to be inhabited, and most disappear during the rainy season when the river rises 10-15 feet. There are … END_OF_DOCUMENT_TOKEN_TO_BE_REPLACED

We left Luang Prabang feeling a little sick to our stomachs—which was an improvement over how we had felt the past two days. A day or so after we got to town we discovered a street vendor selling a delicious all-you-can fit-on one-plate vegetarian buffet, for about $1. Such a deal. We ate there three nights in a row with no ill effect. We got done in by a restaurant. We decided to splurge and had some Indian food as a treat. You never know what’s going to get you. But Luang Prabang also left us feeling a bit nauseous … END_OF_DOCUMENT_TOKEN_TO_BE_REPLACED

To me, that sounds like a good title for a novel—Slow Boat to Luang Prabang. The ideal length for such a book would be something one could read in two days, the amount of time it took us to get down the Mekong River to Luang Prabang from our departure point, Huay Xai (spelled a half dozen different ways, but pronounced “whey sigh”). Huay Xai is just across the river from the Thai town of Chiang Khong, where we spent the previous night. I guess our river trip actually began with a short ride across to Huay Xai on the … END_OF_DOCUMENT_TOKEN_TO_BE_REPLACED