Most of the past week we have spent in a state of pleasant lethargy (which only partly explains the gap since my last posting).

We made it as far south as we could go in Laos, to an island in the Mekong River. The island, Don Khon, is one of a group called the 4000 Islands. The name may be accurate, at least in the dry season when the river is low. But only a handful of the islands are big enough to be inhabited, and most disappear during the rainy season when the river rises 10-15 feet. 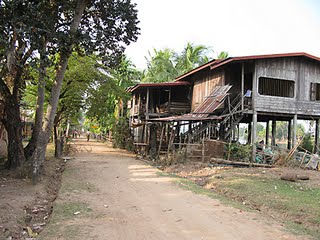 There are three islands with accommodations for travelers. The two smaller, including the one we were on, got electricity just three months ago. The electricity is still of questionable quality, which is the other reason I have not updated for so long. Whenever I plugged in my laptop to recharge, everything got nearly hot enough to melt.

By the time we got to the island we were ready for a break. We had just spent five days in the Lao capital of Vientiane, which was about four more than we wanted to. But we had to wait for visas to our next destination, the country formerly known as Burma.

Vientiane is nothing to write home about— certainly not the seedy but fascinating French Indochinese city that has figured in numerous novels. Well, it still is kinda seedy. But we were offered opium only twice. Perhaps it has gotten tamer at the expense of being interesting. 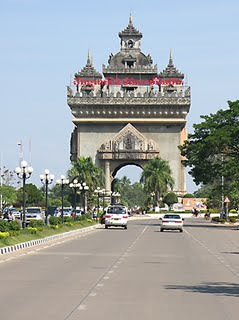 There is a giant avenue resembling the Champs Elysée with the presidential palace (empty, as far as we could tell) at one end and at the other something that, from a distance, looks like the Arc de Triomphe. Though, as a sign inside the structure honestly notes “From a closer distance it looks even less impressive, like a monster of concrete.”

That may seem like a refreshing example of Communist self-criticism, but it’s not. The monument was built in the mid-60s, a decade before the Communists gained control of the country. The concrete used to build it was donated by the US, and meant for the construction of a new airport. Our guidebook notes that local expats refer to the monument as “the vertical runway.”

The Mekong River runs along one edge of the city. When we were there the riverfront, was being terra-formed along several kilometers to make a park with a walking/biking path. The project is being funded by Japan. Giant digging, dredging and bulldozing equipment were busy moving sand and changing the course of the river.

One evening, as we stood looking over the activity, a Japanese man, evidently in charge of the project, arrived with some subordinates. After ordering them around for a few minutes, he saw us and came over to us to explain in enthusiastic, but nearly unintelligible “Japanenglish” what was going on. We got the impression that it was going to be a very nice park, even though we were still fuzzy on the details. 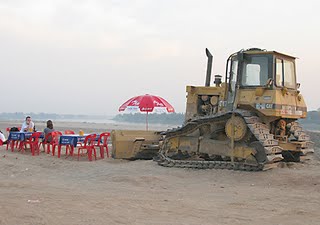 The riverside is a popular outdoor dining spot during the evenings. The presence and activity of the heavy equipment affects the ambience, but that didn’t stop people from eating, drinking and watching the sunset over the Mekong.

When we were finally able to leave town we booked an overnight sleeper bus to our next destination, a southern hub called Pakse. Our bus, like a lot of the large, long-distance buses in Laos, was painted all over with bright, airbrushed graphics. Colored lights illuminated the vast engine compartment. It looked like a rolling bordello.

Inside, it was filled with bunk beds, like a long, narrow summer camp cabin. (So, I guess it might make a pretty good rolling bordello. But there’s not much privacy. It would probably make a pretty good mobile opium den. Not that I’m making any suggestions. I’m just saying…)

Before we left the station there were indications of mechanical trouble; there were ominous knockings from the rear, and the driver seemed to be having trouble with the lower gears. “This doesn’t look good,” I told Faye. But the driver limped the big beast out of town. As long as we were traveling at highway speeds in the higher gears everything seemed to be OK. But every time we had to slow down there was trouble.

Finally, in the middle of the night, in the middle of nowhere, there was a grind and a jolt and some heavy knocking sounds, and the bus died. With all the grinding gears it had been hard to sleep, so we weren’t entirely unhappy that we would finally get some peace and quiet. Most of us dozed for a couple hours before another bus finally came to pick us up—not a sleeper. Considering it was the middle of the night, we were several hours behind schedule, and we had gotten little sleep, the passengers seemed to be in pretty good spirits. I think everyone who travels in these countries half expects something like that to happen sooner or later. 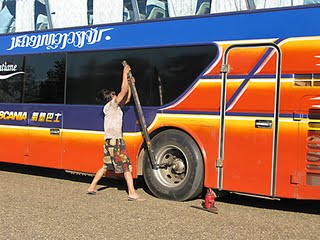 About an hour from our destination, shortly after sunrise, somebody smelled smoke in our replacement bus and ran up to the to alert him. I think we all felt the bus operators needed all the help they could get. But the driver didn’t stop to see what the problem was. A few minutes later a tire blew out.

When our luggage was transferred from the other bus it had hurriedly been piled over a compartment where a spare tire was stored. So all of us piled off the bus as our luggage was being thrown out onto the ground, and tried to make the best of it. A humble Buddhist temple was on one side of the road and a little village was on the other. Some people dozed on the ground, while others wandered around and took pictures of the temple and cute village children, while our bus operators struggled to change the tire with hand tools.

Eventually, all of the luggage was thrown back into the bus, we all got back on and, with our fingers crossed, finally made it to our destination. For the next week whenever those of us who had been on that bus ran into each other, we felt a bond of kinship. We ate and drank together, and recounted horror stories and travel tales. (We were one-upped by a couple who came in later and had been on a small, overloaded vehicle a few days before that tipped over and skidded down the road on its side.)

We spent one night in Pakse and one night a little further south before arriving on the island of Don Khon. We had every intention of spending just a few days, then trying to squeeze in a little more sight seeing before we had to leave Laos. But that was before we started laying in hammocks and watching the Mekong River flow by. Soon we decided there was nowhere else we would rather be, so why go someplace else.

Life in general on the islands seems to flow at about the same stately pace as the river, though with the arrival of electricity that may be changing. There are numerous little family run restaurants and oddly, the food is really good at all of them. We wondered where all these people learned to cook like they do, especially considering that most of the kitchens consist of little besides a rice cooker, a few pots and a couple of woks. 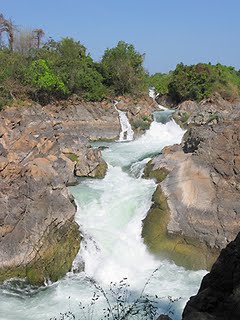 As far as sight-seeing in the area goes there are some spectacular waterfalls, where the usually placid Mekong becomes a seething cataract as it flows around some rocky islands. And guys with boats offer rides in the waters around the islands, especially to the south where one can sometimes see rare Irrawaddy Dolphins. We managed to see a few, but from a distance as they swam in Cambodian waters.

A lot of entrepreneurs have bicycles for rent, which is a good way to get around, even though there is no pavement. There are some dusty roads, a few trails through the woods, and the rocky remains of an old rail bed built by the French.

Nearly all of our time in Laos has been spent along the Mekong River. We’ve seen it flow past cities, and villages and vast tracts of wilderness. It no longer seems exotic, as I felt it was when we first encountered it in the northern part of the country. Instead, it seems almost like a comfortable companion. We’ve seen it only in the dry season, when its waters are low and it meanders along like it has nowhere to go and months to get there. In the rainy season it will come alive again, as will all the rice paddies around it and throughout the country. We’d like to see it then. Too bad I don’t like rain. 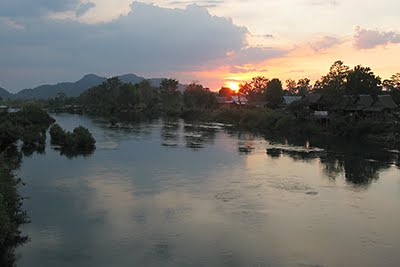 There is much more to Laos than just along the Mekong, of course. I’m sure we’ll be back to explore other areas. We’ve just scratched the surface, but the drift downstream has been a good introduction.

Our next destination is Myanmar/Burma. (What’s in a name? I’ll try to explain it later.) I don’t know what the internet situation is there, so there may be another gap before the next post. Who knows? Much mystery lies ahead.