We left Luang Prabang feeling a little sick to our stomachs—which was an improvement over how we had felt the past two days.

A day or so after we got to town we discovered a street vendor selling a delicious all-you-can fit-on one-plate vegetarian buffet, for about $1. Such a deal. We ate there three nights in a row with no ill effect. We got done in by a restaurant. We decided to splurge and had some Indian food as a treat. You never know what’s going to get you. 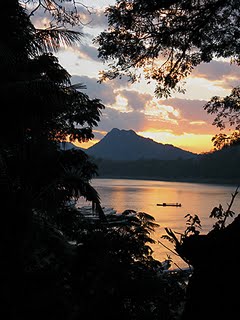 But Luang Prabang also left us feeling a bit nauseous less literally. We never did quite warm up to it. It has been designated a World Heritage City by UNESCO and it certainly has some Old World French Indochina charm, as well as it’s own Lao/Buddhist character. Sunsets on the Mekong are very nice, especially seen from one of the riverside bars. But Luang Prabang also has an international airport with flights from several neighboring countries. It is just a little too easy to get to.

My first impression was that it was a place being smothered by tourism, and I still felt that way when we left town. As our mini-van drove around collecting other travelers headed southward like ourselves, I saw a couple on the garden patio of their hotel, eating their continental breakfast, dressed in their hotel-issued plush robes. I’m sure their room cost as much per night as we spend in a week or two on accommodation. I think the future of Luang Prabang belongs to people like them.

Ironically perhaps, our next destination was another legendary tourist-swamped town, but filled with a completely different class of tourists—young international hedonists. Think Spring Break in Ft. Lauderdale. 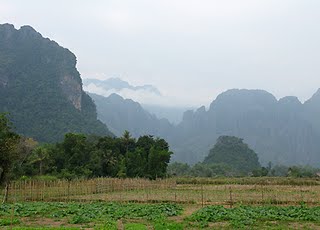 Vang Vieng is a very small town in a spectacular setting. A river flows along the edge of it. Nearby, beyond fields and rice paddies, clusters of tall limestone bluffs thrust up out of the river valley floor. Partially covered with trees and dense vines, the formations look like something from the prehistoric world. Energetic climbers scale the cliffs; the less energetic explore numerous caves and caverns in the limestone. 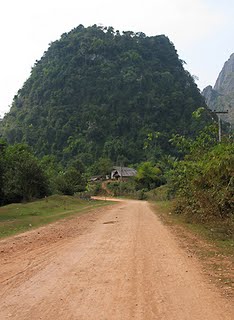 We rented a motorbike and drove past them, on miles of dirt roads, through creeks and several small villages of bamboo huts. People waved and children shouted out to us as we drove by. Several times we stopped to ask for directions. Between them not understanding our questions (or being able to read our map) and us not understanding their answers, we got fairly lost. We’re still not quite sure where we went.

In one village surrounded by stunning, jungle-covered limestone peaks, we stopped at a little shop that had been set up in the front yard of one of the small houses. We ordered a couple of sodas and chatted with the man and woman who evidently lived there. And by “chatted” I mean we talked, and they talked, and none of us had any idea what the other was saying.

Well, we did have a little breakthrough—Faye pointed to a satellite television antenna in the neighbor’s yard (villages aren’t what they used to be) and said, “TV”. The couple seemed to recognize that word, then told us the word for television in their language. It was probably Lao, but perhaps some other local language. It didn’t really matter because we would have had to spend the rest of the afternoon there repeating the word for it to stick in our heads. Didn’t seem worth it.

As beautiful and peaceful as the village and the countryside around it were, the town of Vang Vieng is something else entirely. The few streets it has, mostly dirt, are literally filled with bars, cheap guesthouses, restaurants, internet cafes, and travel agencies … and something else I don’t quite know what to call.

I have a theory that clumps of tourists cause temporal field distortions—odd little bubbles of alternate reality, areas of bizarreness that sometimes defy explanation. Viang Veng is famous for two things—and I’ll get to the second thing shortly. Around town, sometimes side-by-side, there are these open-air … I’ll just call them TV lounges. They are basically low tables with cushioned seating areas facing several synchronized televisions, all playing endless episodes of “Friends”. It is truly one of the strangest things I’ve ever encountered. Any time of day or night there will be people laying around watching these reruns—and sometimes the places are packed. 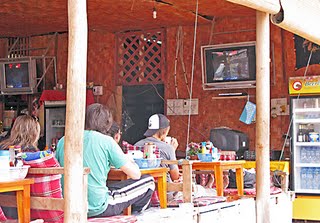 We may not go rock climbing, or mucking through caves, but we could not pass up participating in this bit of bizarreness. We sipped bad mixed drinks and lounged through several episodes one evening—Season 3 I think. It is amazing how short the episodes are without commercials, or maybe for some reason we just lost track of time. We finally stumbled out of the distortion field around 10:30 at night to make our way back to our room on the quiet side of the river, just as the rest of the town was getting warmed up for a night of partying.

Speaking of river, the other thing the town is known for is tubing. You can rent big inner tubes and a tuk-tuk will take you upstream a few kilometers and you float back to town. Or at least that is what the naive (us) think. I am a big fan of floating down rivers on inner tubes. It offers just the right combination of getting out in nature and relaxing. So we rented our tubes, climbed on a tuk-tuk crowded with mostly enthusiastic 20-somethings and got dropped off at the river upstream.

It was right about then that we got the feeling that “tubing” was some sort of euphemism. On the banks of the river were three or four wooden decks with bars, all with music amplifiers cranked up to 11, all completely packed with drunken kids (a lot of Australians—and nobody parties like Aussies!). Giant beams were tilted out over the river and cables with sort of zip line/trapeze contraptions ran between them. People would sail out over the river screaming and hooting and plummet into the river, sometimes gracefully, usually not.

The different decks competed for customers by throwing plastic bottles tied to ropes into the water towards people swimming or floating. People could grab the bottle and be towed (or rescued from drowning) to the deck of their choice.

Faye and I felt surprised and bewildered. We had come to go tubing and were mentally unprepared for the scene that met us. We seemed to be unable to shift gears, to adopt the new paradigm. Or maybe we were just too old for that kind of thing. I wasn’t quite ready to admit to that, but I really was looking forward to tubing.

I had spent every spare moment of my childhood summers floating down the river on truck tubes, and was completely comfortable now throwing my tube in the water and jumping off the rocks at the side of the deck, just like old times. But Faye got in a few yards upstream where she could wade in. By the time she got into the water I was already floating out in the middle of the maelstrom. It was surreal and crazy, and kinda fun.

The next time I saw Faye the current had pulled her into a calm area between two of the decks—well, calm water anyway, though otherwise anything but. She still hadn’t got the hang of navigating the inner tube and hadn’t really focused on what was going on with the bottles. I called to her to paddle out into the middle of the river where the current was. With a look of fear on her face she shouted “They’re throwing things at me!”

Maybe it was the shot of Lao whiskey someone had forced on me as I made my way across the crowded deck before I got in the water, but I thought that was hilarious. I wanted her to relax and enjoy it as much as I was, and I started to explain that the bottles were not projectiles aimed at her, but sort of like life preservers. Happy young people wanted her to come party with them.

But just as I started to say that somebody sailed out over the river on a trapeze and cannonballed right behind her. The look on her face told me that her fear had turned to terror. I heard her cry out—to me or to God, I don’t know—“Get me out of here!”

She managed to escape, and the rest of the trip down the river was pretty much what we expected tubing to be. We did pass a few more riverside bars. One tried to lure us in with signs promising “Psychedelic Mushrooms” and “Happy Brownies,” but we decided against those treats. Last time we checked it wasn’t the 60s anymore. Or maybe we were passing through another temporal distortion field.

We floated along the base of some fantastic limestone bluffs. Downstream a ways we passed a small herd of water buffalo nearly submerged in the river. At some point Faye said, “I’ll bet most of the people up there never float down the river at all. They’re all too drunk.” And it was true.

That evening, after the sun had set, a tuk-tuk packed with partiers, their inner tubes loaded on top, passed us in the street. Four Aussies rode on the rear bumper with their pants down around their knees, shouting and trying to hang onto the vehicle and a beer at the same time. I had finally learned the true meaning of “tubing.” If only I had known.

After a few strange but oddly enjoyable days, we moved on to Vientiane, the capitol of Laos, where we are now. We’ll be here for a few days, waiting for the Myanmar/Burma embassy to process our visas.