When you get on a bus and see that the only amenity is complementary barf bags, you know you are probably in for an interesting ride, and quite likely an uncomfortable one. It seems like you can’t have the first without at least some of the second. The key is the ratio of interesting to uncomfortable.

As we bounced and swayed our way north towards Lao’s remote northern region over a rough and winding road, I kept thinking about that ratio. We traveled through verdant forests, past hillsides covered with rubber trees and banana plantations, and beautiful fields of beans and other vegetables. We looked out at rugged, green hills, rolling back as far as we could see. From time to time we’d go through a hill tribe village, with tiny houses up on stilts, made of rough boards or palm thatch.

On the seat beside us a woman and her young son retched over and over, hour after hour. Their misery put our minor discomfort into perspective. Actually, we felt surprisingly good, especially considering our activities the night before. 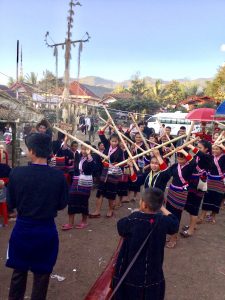 We had spent the night in a town along our route described as having all the charm of a bus stop. When we arrived the description seemed apt. But we’ve spent a lot of time in all kinds of bus stops, and a whole town with the ambience of a bus stop didn’t deter us. We found a decent place to sleep, then set out to find a place for a beer and a snack.

We wandered a surprising distance, but the place we found served cold beer and delicious food. As we ate we kept hearing festive music and noise someplace nearby. So we left the restaurant to look for the source of the celebration. A half block away we found the waning mhours of a two-day New Year’s festival of one of the areas many ethnic groups, the Khmu. It was a couple weeks since our last New Year’s celebration, so we were happy to find another one so soon.

We didn’t get 20 feet into the festival before we were invited to join a group who had clearly been enjoying themselves. They politely asked us whether we drank beer, and seemed excited to learn that we did. I was excited to learn I was about to get free beer.

After a few enthusiastic toasts (I assume) we set off with half-finished beers in hand to see the rest of the celebration…and were again immediately drawn into a circle of celebrants, this one drinking a fermented rice beverage from a communal jug through bamboo straws. It was delicious! Obviously we don’t speak Khmu, much less drunken Khmu. But there were a couple of guys with a smattering of quasi- English, so we could pretend we were having a conversation. Besides, all drunken conversations are similar, and nobody’s going to remember them anyway. 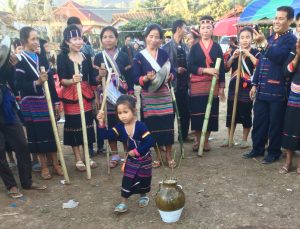 A young Khmu girl dances around a jug of fermented rice drink.

That pattern repeated itself several more times. One guy kept following us around chatting in what I’m sure he thought was English, and offering me shots of a potent rice whisky, poured out of a section of bamboo. The only reason I kept drinking it was because it tasted really good.

Though the celebration was coming to a close, there was still dancing here and there. Faye was invited to join in one involving jumping between bamboo poles, but declined. There was some pretty fancy footwork, and after what we had been drinking, just walking was enough of a challenge. (Video link:Khmu Pole Dancers)

Like I’ve said before, all the best experiences are unexpected, and that one was a doozy. But maybe not such a good idea the night before a long bus trip over wretched roads. I’m sure if we had gotten to the party any earlier we would not have been in any shape the next day for travel of any kind.

The bus ride north took nine hours, to a place called Phongsaly. With a population of about 6000 it is the last town of any size before the Chinese border, on the north and west. The border with Vietnam is not far to the east. In this part of Lao Chinese is commonly spoken, and very few people speak even rudimentary English. The food is mostly Chinese, as are a lot of products in the markets.

Lao is a communist country, but pretty laid back in most respects. There are plenty of ministries of this and that wherever you go. But this close to China there does seem to be noticeably more bureaucratic zeal.

On our first morning in Phongsaly we were awoken at 5 a.m., first by some gentle music broadcast over loudspeakers, followed by a bugle playing a military wake-up tune, then a rousing speech of some sort. I have no idea what they were saying, but I imagine it was something along the lines of “Wake up! Get up! Join your fellow workers in the cause of defending the People’s Glorious Revolution!” That went on for an hour, a little music and a lot more speaking, etc., etc. I guess it could have been the weather report and traffic conditions.

I felt like a capitalist laggard staying in bed. When it comes to politics I lean left, but I have enough libertarian in me to believe the government has no business telling me when I should get up.

Tomorrow, though, all that noise will come in handy. We have to get up early and make our way 20 kilometers through the mountains down to the Nam Ou river where, if all goes well, we’ll be able to get a boat and start heading south.