Myanmar isn’t the kind of place you can just go to, enjoy the sights, and leave. You can’t be in the country for any length of time without thinking about social issues, political issues, history and more. It’s not just a trip, it’s an education. And no more so than now, as Myanmar is on the cusp of what promises to be some major changes. 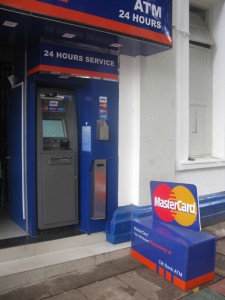 This Yangon Master Card ATM machine may be the first in Myanmar.

At present most changes seem minor, but are significant. There are many new banks functioning and open to the public. Some even have ATM machines, though are only for domestic transactions. (One bank is evidently linked to the Master Card network.) There are many new gas stations, with pumps and everything. 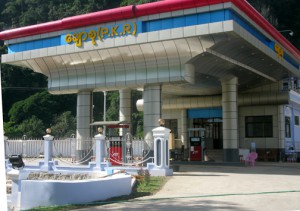 One of the many new gas stations

Ad hoc gas stands dispensing black market gasoline and diesel from jugs and water bottles may soon be a thing of the past. Foreigners are able to rent motorbikes and roam around at will, except in areas of conflict. Cellphones are everywhere. Internet access is widely available and, as far as I’ve been able to tell, not censored.

When we were in Kyaukme in the northern part of the country three years ago, the owner of the one hotel in town licensed to lodge foreigners said to us as we left, “Maybe things will be better when you come back.” In addition to the assumption that we would be back, his optimism for the future was heartening. And it certainly turned out to be true for him; he is now mayor of the town and the leader of the local Shan ethnic party. 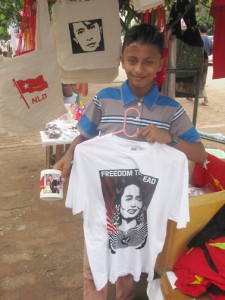 But I’m sure what he hoped for was much like what has happened in the  last three years. Political icon Aung San Su Kyi was released from house arrest and elected to parliament in what most consider to be a free and fair election. Her party and the many regional ethnic parties are able to campaign, and there seems to be little restriction of the press. (Her image can be found on the front page of at least one newspaper everyday, as well as on T-shirts, calendars, coffee mugs, key chains and much more.

But the military still holds the reins of power and shows no signs of letting go anytime soon. The Myanmar people seem to understand that the road to real democracy will be a long one. And it could be bumpy. But it is hard to imagine that the gains made so far will be lost. The outside world has been let back in, and with it global scrutiny. Myanmar wants to join the modern world, and there will be a lot of “carrot-and-stick” incentives offered by countries who see Myanmar as a rich resource. 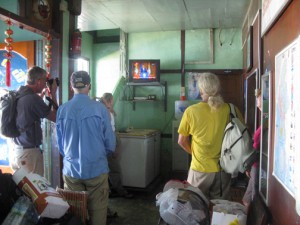 Travelers and locals in a northern Myanmar guest house watch President Obama give a speech at Yangon University November 19, 2012.

And that is likely to be the real danger as Myanmar faces the future–fending off large countries and companies with their own agendas. China to the north has long been a major trading partner, and its influence is obvious everywhere. Myanmar’s rulers have refused to capitulate to China, blocking a major Chinese hydro-electric project. The overtures Myanmar has made to the West may be a hedge against further Chinese encroachment. But it will also have to negotiate trade and development deals with the West that will be of benefit to Myanmar, and the country as a whole, and not just a few players.

Whether or not the military government can do that remains to be seen. But now, whatever they do will be scrutinized by people all over the world, many of whom are already hyper-critical of the government, as well as civilian parliamentarians such as Aung San Su Kyi.

To fend off international players with predatory intentions Myanmar’s best hope may lie in its membership in ASEAN,  (Association of SE Asian Nations). There are hopes that the member countries can form an economic alliance to strengthen the standing of member countries. Myanmar is scheduled to chair the next summit meeting, and it will be interesting to see what it brings to the table.

Another real problem facing Myanmar is the ethnic conflicts which have been going on for a century or more. The situation was exacerbated in the wake of the British withdrawal in the late 1940s. Some groups, such as the Christian Karen, had been trained and armed by the British, and never had any intention of submitting to a central Burmese authority, and still don’t. The instability caused by domestic uprisings were a significant reason the military took over the government after ten years of seriously flawed civilian rule in the 50s.

At least one group, the Kachin in the far north, is still fighting, though ten other groups have signed peace treaties with the current government. There have been numerous atrocities over the years, and there are deeply held feelings of distrust between the Burmese and the ethnic minorities.

It is hard to say which front will prove more difficult for the government of Myanmar to deal with, the international one or the domestic one. I think that is the main reason that the country will not have a democratic civilian government any time soon. The immediate future is going to be a real challenge, and democracy is notoriously messy even under the best circumstances.

Democracy should not be postponed, but it should not be rushed either. It will be a process, something that seems to be understood more by the people of Myanmar than by many armchair activists from the developed world. If Myanmar is able to achieve a peaceful unification it will be for the first time in a long and turbulent history. —-[More photos]

We spent the last week of this trip to Myanmar on the peninsula south of Yangon, bordered by the Andaman Sea on the east and Thailand on the west. The capitol of the area, and Myanmar’s fourth largest city, is Mawlamyine. It is the southernmost place in Myanmar we visited. Coincidently, in addition to Katha, the furthest north we got, it is another place that George Orwell was stationed in his service with the Indian Imperial Police. Mawlamyine (then called Moulmein) served as the capitol of British Burma from 1826-1850. There are still a number of colonial buildings around from … END_OF_DOCUMENT_TOKEN_TO_BE_REPLACED

I read an account recently of a boat trip similar to the one we took from Katha to Mandalay. It was described as “not to be missed…and not to be repeated.” That is exactly how I feel about it. I had visions of a leisurely multi-day trip down the Ayerwaddy River past scenic countryside and rustic but quaint villages in a semi-comfortable craft, or something like that. The reality was a bit different. The boat that would take us down the river arrived about 6 p.m., a couple hours later than scheduled (it is a pattern here.) It was a … END_OF_DOCUMENT_TOKEN_TO_BE_REPLACED

With this most recent leg of the trip in Myanmar, I feel like we are finally getting off the beaten path a bit. Feels good. The train trip north, out of Mandalay, was adventurous mainly in its uncertainly. We were scheduled to leave at 4:30 a.m., and had gotten up at 3:00 to be at the station in plenty of time. Which we were, and more. The train finally showed up around 6:00, and we left a half hour later, two hours behind schedule. The scenery along the way got better and better as we chugged north, at a stately … END_OF_DOCUMENT_TOKEN_TO_BE_REPLACED

I’ve noted before that being in Myanmar is like stepping back in time. We were last here three years ago and we wondered how much would be changed now that the country has “opened up.” (It wasn’t exactly closed before, in spite of the prevailing narrative.) The short answer is: not much. Yangon still has that decaying colonial-era atmosphere, the streets are still seething with people and lined with micro-merchants selling everything imaginable, and on side streets and back alleys craftsmen continue to make by hand everyday things we often take for granted. In one shop we passed you could … END_OF_DOCUMENT_TOKEN_TO_BE_REPLACED