I’ve noted before that being in Myanmar is like stepping back in time. We were last here three years ago and we wondered how much would be changed now that the country has “opened up.” (It wasn’t exactly closed before, in spite of the prevailing narrative.) 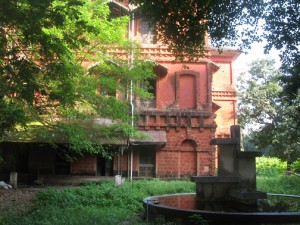 The old railway office in Yangon, decaying for decades, awaits preservation and restoration.

The short answer is: not much. Yangon still has that decaying colonial-era atmosphere, the streets are still seething with people and lined with micro-merchants selling everything imaginable, and on side streets and back alleys craftsmen continue to make by hand everyday things we often take for granted. In one shop we passed you could pick out your own fabric and have an umbrella made on the spot.

There are more tourists, for sure, mostly on pre-arranged package tours and going to the usual tourist highlights. That makes it harder to just show up someplace and expect to be able to find a room, as we usually do. And when one does find a room the price will likely be at least twice what it was three years ago.

But we’re doing our best to avoid the package tourists and get off the beaten path a bit more. Our general plan is to go as far north as we can (or as far as the government lets foreigners go–there are skirmishes between ethnic armies and the government forces in the north, and between Muslims and Buddhists in the west), then work our way back down, avoiding buses and taking more trains and boats.

The view out the window of our (rather nice) hotel room in Yangon.

We spent a couple of nights in Yangon, exploring the seedy charm of that city, as well as making a pilgrimage to the gates of Aung San Suu Kyi’s house. We hoped to be invited in for tea, but no such luck.

We wanted to take the overnight train from Yangon to Mandalay, but had trouble finding the ticket office. We went in to a local tour office to ask for information. “Why take the train when the bus is faster, more comfortable and cheaper?” he asked us. “There is a new road now!” He was right, but as I told him, there’s no adventure in that. Turns out we had seen the ticket station already, but didn’t think it was operational because it looked so derelict. But Yangon is like that.

The train trip was indeed long and bumpy, with antiquated rail cars. But the trip was certainly more interesting. 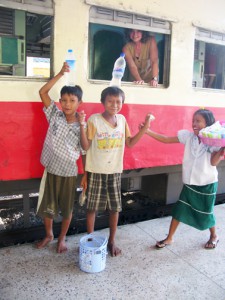 It was easy to imagine we were having an experience similar to travelers many decades ago. We got sleeper bunks, which just meant you went over bumps laying down instead of sitting. I’m sure sometimes we were airborne. Faye says she didn’t sleep at all, but I slept pretty well. I love sleeping on trains, even bumpy ones.

Trains tend to go through the best parts of the countryside, and the worst parts of towns and cities. As we were leaving Yangon, with about an hour of daylight left, we passed trackside shacks and makeshift shelters with no electricity, running water, or even dry ground in some cases. And I realized I had no reason to ever complain about anything ever again. I think if I woke up some morning in such wretched conditions I would hang myself first thing. But somehow these people not only go on living their entire lives like that, they work, have families and raise children. And the cycle continues as it has for who knows how long. 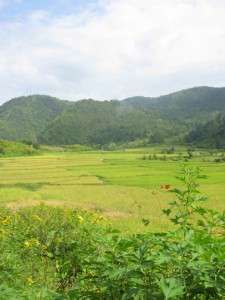 In contrast, the next morning we were in the countryside, amongst miles and miles of green pastures, with the occasional pagoda off in the distance. We saw a few farmers plowing fields with teams of oxen, probably as they have for centuries. The rural poor, while probably not any better off than their urban counterparts, have a better life I think. But what do I know? One of the challenges of this kind of travel is to not make judgements based on comparisons with one’s own comfortable life back home.

I think a lot of us would not have to go back very far on our family tree to find those who lived in somewhat similar conditions. My mother grew up in the Ozarks of Arkansas. She lived in a shack without running water or electricity that probably wasn’t a lot better than what we saw from the train. To quote my uncle, “The boards were so far apart you could sling a cat through them.” (A lot of hillbilly sayings have cats in them.) But their neighbors weren’t any better off, and they all managed. So, as we travel we observe and try to understand what we see without being too judgmental. 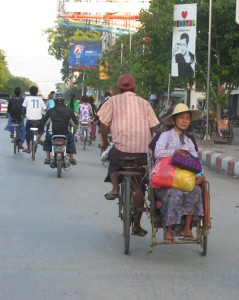 Getting around Mandalay in a Tri-shaw.

Mandalay, Myanmar’s second largest city, was pretty much just a stop-over to rest up before going further north, so we didn’t have any big plans for exploring around there. We saw what we wanted to last time. The most memorable part of this stay was a rather exciting earthquake that hit early the second morning we were there. Our room was on the fifth floor. I was trying to sleep, but as soon as the bed started shaking I woke up in a hurry. I said to Faye, “Earthquake!, Get dressed and get packed!” Unfortunately she had started her “third-world diet” after dinner the night before (i.e. getting sick and losing your appetite for a couple days) and was in no mood to follow directions. But we got packed as soon as possible just in case things got worse.

Later we got a room on the second floor, and were happy we did that evening when a second, smaller quake hit. We were still packed, Faye was feeling a little better, and we were half ready to run for it, but things settled down again without damage.

Our next stop a few hours north was the hill town of Kyaukme (“chow-MAY”), a place we visited before. Our main reason to return, besides just liking the place, was to find a charming little boy we met last time who had invited us to his house and chatted with us in pretty good English for quite a while. And we did find him, not long after getting settled. He is almost13 years old now, and every bit as charming as before.

The next afternoon he took us up to a hilltop pagoda for a good view of the town. There were stairs all the way up the hillside, and about halfway up we encountered a group of older people having some afternoon coffee and cookies. When they saw us they immediately insisted we join them. None of them spoke any English (our little guy translated a bit), but it was another example of the kindness and generosity we have experienced here. 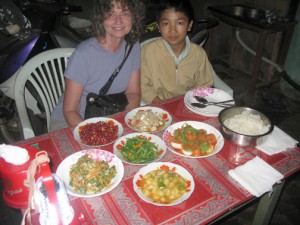 Shan feast prepared for us by the boy’s aunt.

That evening we were invited back to the little boy’s house for a delicious dinner prepared by his aunt. Faye was still feeling a little off so couldn’t eat much, but I tried to make up for it. After the meal, as we were leaving the family made sure we knew they hoped we would come back to see them again. And I’m sure we will. The little boy (we’ll call him Zin, for short) has aspirations to go to university abroad, maybe the US, Canada or the UK, and study history and geography. I don’t know what the path to there is from where he is now, but I hope we can help him achieve it. He has a lot of ambition and potential.

We’re back in Mandalay for another brief stopover. Tomorrow we leave on the early (4:40 a.m.) train up to Nabar. That is about as far north as foreigners can go right now. From there we’ll get some sort of transportation over to a town on the Irrawaddy River, called Katha. We’re planning on drifting back to Mandalay on a boat trip that takes two or three days, depending on all kinds of things. President Obama and Bill Clinton are supposed to be coming to Myanmar in a few days. While they are here we will be on the river somewhere in the middle of nowhere. —-[More photos]