We have spent the past two weeks in a couple of towns in rural northern Thailand. I wrote about Pai last time so I won’t repeat myself, but [here]is the link. 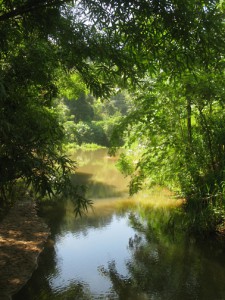 I will say one thing though. A town full of fellow travelers has its pros and cons. Tourism distorts a place. But one of the real pleasures of travel is making friends from other parts of the world who are taking similar journeys. We have something in common to get us started, and sometimes quick bonds are formed. Stories and information are shared, and our knowledge of the rest of the world gets a little broader. 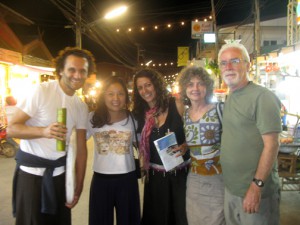 Email addresses and Facebook pages are exchanged, and promises are made to meet again someplace else, on the road or perhaps back home. You never know.

OK, back to the travelogue… The second town, Mae Hong Son, is further along the same road another 70 miles or so, Highway 1095 that starts a little north of Chiang Mai. To give you some idea what kind of road it is, between Chiang Mai and Pai there are famously 762 curves. (In the Pai markets that number is plastered on thousands of t-shirts, mugs, post cards, key chains and every other kind of tourist paraphernalia.)

By the time one gets to Mae Hong Son the curve count climbs to 1864. That’s more than 12 curves per mile (or about 7.6 per kilometer). Motorcyclists love the road. Travelers with weak stomachs packed into a mini-van, not so much. This time I remembered to take some motion sickness pills, and it wasn’t so bad. 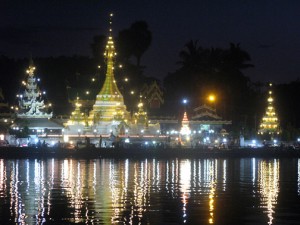 Mae Hong Son doesn’t get much coverage in the guidebooks. It is an oversight, in my opinion, but one that I hope continues. It is a very picturesque town with a beautiful little lake in the middle of it. On one side there is a pagoda which is lit at night and casts its reflection in the water. On a hill above the town is another large pagoda, which is a good place to look out over the town and the hills beyond.

You can’t look at scenery like that without wondering what is out there. In both places, Pai and Mae Hong Son, we rented motorbikes and roamed the countryside during the day, without any particular destination. Much of the time we didn’t know quite where we were. But every so often we would find our way to someplace we recognized on the map, then we’d strike out again, taking whatever road looked interesting. When we were lucky a paved road would turn into a dirt road, then peter out at a field or mountainside, or maybe take us through some hill tribe village. 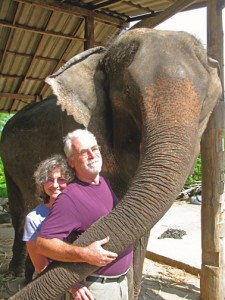 Getting reacquainted with our favorite elephant.

In Pai we found ourself on a road familiar to us from our last trip, the road past the elephant camp where a middle-aged elephant named Phanom lives. On Christmas Day of that year Phanom gave us a ride and she has had a special place in our hearts ever since (see the Pai link above). So we stopped to get reacquainted. I don’t know whether she actually remembered us, but we like to think so.

In Mae Hong Son we drove north towards a nominal destination of a Chinese village near the border with Myanmar. The residents are mostly descendants of the 93rd division of the Koumintang, the nationalist Chinese army that fought against Mao Tse-tung. The Koumintang lost to Mao, but the 93rd division kept fighting, taking refuge in northern Burma at first, then migrating to northern Thailand in the early 60s. 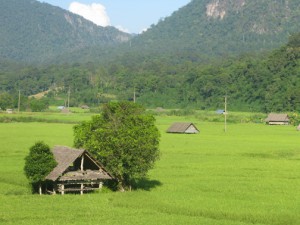 We meandered a bit, taking a few side roads and “wrong” turns, and never did quite make it to the Chinese village. But the ride was great, up into the cool mountains on curvy roads, past lush rice fields nearly ready for harvest. I’m sure we’ll be back to Mae Hong Son, and might make it all the way to the village next time. Or maybe we’ll just spend the day wandering again, getting lost and finding our way back.

We spent last night back in Chiang Mai. This afternoon we fly to Yangon, Myanmar. We’re looking forward to going back to that country, to see what kind of changes it is experiencing now that it seems to be opening up to the west. I’m sure there is both good and bad. Something we really enjoyed when were were there three years ago was the relatively few tourists, and the open and welcoming attitude of the people. Whether that attitude will survive the onslaught of tourism remains to be seen. An immediate problem is getting hotel rooms. Prices have doubled and even tripled, and still there is a shortage of government approved establishments. We have reservations for the first couple of nights in Yangon, but from there we are winging it.

Internet connections are a bit iffy in Myanmar, but I hope to get out at least a couple of posts during the nearly four weeks we’ll be there. On the day of US elections we will likely be out in the boonies somewhere, so I don’t know when we’ll find out the results. If things go badly maybe we’ll just head for the hills. —-[More photos].