After Chiang Mai our next destination was a small town up in the mountains of northern Thailand called Pai.

Pai was a hippie haven back in the 70s, along with legendary destinations such as Katmandu Nepal, Goa India, Kabul Afghanistan and a few other places. There are still echoes of that era in Pai with a lot of semi-mellow neo-hippies, Thai Rastafarians, New Agers and assorted characters, not to mention restaurants with brown rice, yoghurt and good whole wheat bread.

There is a nightly street market. But unlike the other markets we’ve enjoyed so far, most of the stuff in Pai is touristy souvenirs. There are, famously, 762 curves between Chiang Mai and Pai (which left me feeling a bit queasy on the way up). That figure is printed on every medium imaginable—t-shirts, post cards, license plates and more. Sometimes Pai is indicated in a numerical shorthand; 762 (number of curves), 1095 (the highway one takes to get there) and 58130 (the postal code). I guess a t-shirt with those numbers printed on it is a cryptic way of saying “I’ve been to Pai.” If you have to ask…. 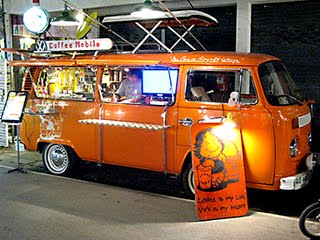 There was one thing at the market I found pretty cool; there were probably a dozen or so old VW buses that had been restored and converted into vending stands, including one that was a complete espresso shop. I almost expected to see one selling tie-dyed t-shirts and hookahs, but no such luck.

In spite of the tacky market, Pai is really a beautiful place. It is in a valley with heavily forested mountains all around. We rented a motorbike and putted around the countryside outside the town. We passed water buffalo and Brahma cows grazing in dry rice paddies, and saw a little of what rural Thai life is like. Very different from the cities where we’ve mostly been so far. 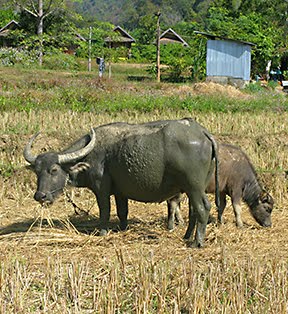 We got to Pai a couple days before Christmas. Since Thailand is a Buddhist country, except for some shiny “Merry Christmas” banners strung up on some tourist hangouts, Christmas passed largely unremarked. A few Thais, showing their cultural sensitivity, did wish us a Merry Christmas, and we had to remember it was inappropriate to wish them the same.

So, being in a country where the national symbol is the elephant, we decided to spend Christmas morning riding one. The day before we had ridden the motorbike out and petted some of the elephants available for riding; that was the closest we had ever been to an elephant, and we didn’t know quite what to expect. But the ride turned out to be an amazing experience. 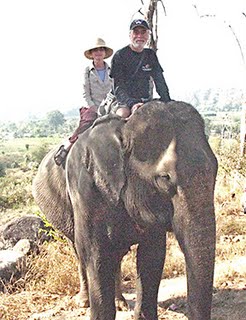 Though the Indian elephants, which are what the ones in Thailand are, are smaller than their African counterparts, there is no escaping the fact that compared to humans, they are massive. Standing next to one makes you feel really small, and climbing on top of one even more so.

Riding an elephant, or at least the one we rode, is like riding a big cow—a really big cow. (And yes, I do know what riding a cow is like. Don’t ask.) Actually, it felt more like what I imagine riding a gentle dinosaur would have been like. Our weight seemed to be completely insignificant.

We rode a 50-year-old gal named Phenomn (middle-aged for an elephant, so perhaps there was an empathetic bond between us). Along with three or four other elephants and their riders, we went out through the countryside, which was a grand way to see it.

We could feel Phenomn’s muscles ripple under our overstretched legs. I straddled her neck and tucked my knees in behind her ears, which felt like a relatively secure position; Faye sat a little further back where she could hang onto a rope tied around the elephant’s chest. From my vantage point I could look down over Phenomn’s huge head, and I patted it every once in a while, or rubbed her ears, hoping to convey some affection. Sometimes elephants and their handlers grow up together in the same family. I’m not sure what Phenomn’s history is, but she did seem like a huge family pet. 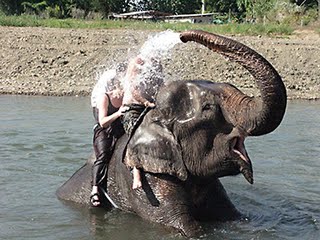 After the trek through the countryside we rode into a river where the elephants sprayed themselves, and us. And then tossed us off into the water as many times as we cared to climb back on. It is an awesome feeling being thrown into a river by an elephant. I thought of Woody Allen’s line in Annie Hall, that it was “the most fun I’ve ever had with my clothes on”—in spite of my clothes being soaking wet.

In Thailand elephants have been domesticated for centuries. I’m not sure there are any in the wild anymore. They are basically the heavy equipment of farm animals, helping to clear forests and move logs. In areas travelers visit, such as Pai, some elephant owners make money giving people like us the chance to ride them. From the elephant’s perspective, it seems like it would beat working.

Later, Christmas evening, we treated ourselves to a massage. Unfortunately we couldn’t get massaged where we really needed it after straddling an elephant all morning—it wasn’t that kind of place. It felt wonderful anyway, but Faye and I walked a bit like elephants for a few days afterwards.

We left Pai on a Saturday morning, just as hordes of Thai weekenders were pouring in, and returned to Chiang Mai. I had to get some dental work before leaving Thailand, which I’ve now done. Though that experience went pretty well as far as visits to the dentist goes, it reinforced the truth of Einstein’s observation that time is relative—an hour in a dental chair is quite a bit longer than an hour in a massage chair.

Now that that is done, we are going back up into the hills of northern Thailand. We’ve been talking to a Thai woman who owns a shop in Chaing Mai and does business with some of the hill tribes. She has told us of a couple of places that sound interesting. Whether or not they celebrate New Year’s remains to be seen.