After an understandably quiet Christmas in this Buddhist country we started wondering where we should plan to be on New Year’s. We couldn’t justify dallying any longer in Chiang Mai, and we needed to be heading north in the general direction of where we would cross into Laos.

In Chiang Mai we had been talking with an interesting Thai shopkeeper, a young woman who came from a farming family in the eastern part of the country. In her business these days she traveled quite a bit, dealing with some of the hill tribes in the north. She suggested that we might find the town of Mae Salong interesting. It was Chinese, she said. Definitely odd, we thought, and maybe a special place to end the year and start the next. Except that to the Chinese, New Year isn’t until mid-April. But we had to find out what a Chinese town was doing in Thailand. 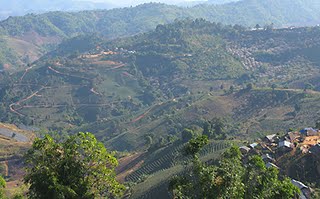 We took a bus north out of Chiang Mai to the end of the line, then got into one of the small pickups, with bench seats and canopy, that serve as public transportation in rural areas, as well as taxi’s in urban areas. Besides us and another traveling couple, the back of the pickup filled up with village people from local hill tribes dressed in bits and pieces of their traditional outfits. For the first time since we got to Thailand we were reminded of our travels in Guatemala.

Unlike the indigenous Mayan groups of the Guatemalan highlands who are the original inhabitants of the area, the dozen or so hill tribe groups of Thailand’s northern mountainous area are relative newcomers—migrants and refugees from Tibet, Mongolia, Southern China and other Southeast Asian countries.

As we learned, the most recent are the Chinese of Mae Salong, who are remnants and family of Nationalist Chinese soldiers who fought against Mao Zedong’s forces in 1949. While Chiang Kai-Chek’s faction fled to what is now Taiwan, a significant number of troops retreated into Burma, where they were attacked repeatedly by the Burmese. They were eventually expelled, some to Taiwan and others into northern Thailand. In the early 50s the king of Thailand, the same one who is on the throne now, granted the Chinese refugees in Mae Salong the right to remain and helped to foster aid projects for the area. The Chinese of Mae Salong maintain strong ties with Taiwan, sometimes sending their kids there to be educated.

By the time we got into town, the day before New Year’s Eve, Mae Salong was no longer the quiet little place it normally is. The handful of guesthouses were nearly full, taken by Thai vacationers who were pouring into town for New Year’s, and room prices had tripled. We didn’t have reservations, and the rather basic room we found had skyrocketed from $3 to $9 a night. In spite of things being not quite what we had expected, the town still seemed like it might be an interesting, off-the-beaten-path place. 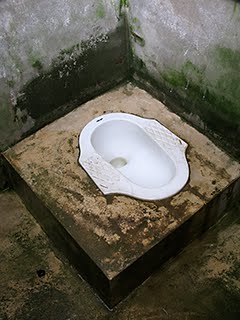 Turned out that it was off the beaten path enough that we could no longer avoid the dreaded squat toilet, which was out in back, down some shaky wooden stairs.

The squat toilet, common throughout Asia but often optional in areas frequented by Westerners, is little more than a glorified hole in the ground. I can only assume that its invention predates the invention of pants, which are a logistical nightmare.

Not only that, Asians must be a lot more flexible than I am. I am nearly as uncomfortable talking about squat toilets as I am using them, so I am not going to describe exactly how they are used. But I’ll just say this: Getting down with the people if fine, but what if you can’t get back up?

The last day of the year we rented another little motorbike and explored the picturesque hills around Mae Salong. There are a number of villages of different ethnicities in the area. Though the Chinese mostly live in concrete houses, thanks to the aid given them, the other hill tribe villagers still live in small houses on stilts made entirely of bamboo. They are pretty decent structures and, given a choice, I think I would prefer the bamboo houses.

In years past, and even today, the cash crop for the Chinese and others of the mountainous area where the three borders of Burma, Laos and Thailand meet, known as the Golden Triangle, was opium. Thailand has been quite successful in eradicating opium production by a combination of punishment and incentives, and in the area around Mae Salong the cash crop these days is tea. 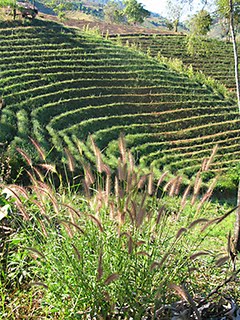 Terraced hillsides of tea bushes are scattered throughout the area, sometimes with rice paddies at the bottoms of the hills. In the town, tea flows freely. There are numerous shops selling tea and offering free tastings. At our humble guesthouse tea was not only complementary with every meal at the attached open-air restaurant, if we stood still for more than a few seconds in the lobby area a glass of tea would appear on the table nearest us. We drank a lot of tea.

For New Years, the Chinese of Mae Salong had geared up for the flood of Thai tourists with a tea festival. In an open area in the middle of town a couple dozen stalls of tea vendors vied for attention, urging tea tastings upon everyone passing by. And not tea bag tea, or kept-hot-on-a-burner tea—each cup was made fresh in a fascinating little process and served with some ceremony. We soon felt awash in tea, and guilty that we couldn’t buy a package of tea from every place that offered us a drink. (The tea was not cheap, probably about the same price as a similar quantity of opium. Perhaps they’ve taken the government’s “replace opium with tea” dictum a little too literally.) 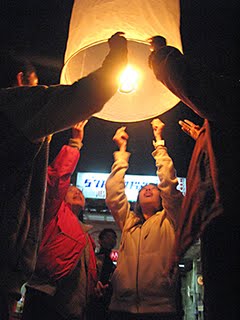 The tea stalls were along the sides of the field; in the center were examples of the bamboo houses from several of the local hill tribes. Inside one was a sample family, and we were invited in for—you guessed it—tea. We sat cross-legged around a little fire built in a clever earthen pad built right on the bamboo floor. Our guilt finally overcame us and we bought a package of ginseng oolong.

During New Year’s evening at the festival people were lighting lanterns that would inflate with the heat of the flame and drift up into the sky, carrying with them aspirations for the new year. We left the festival before midnight, returning to our guesthouse, not far from the festival, to celebrate a little more quietly with others there. At midnight the proprietor opened a bottle of Thai Scotch, poured us all a shot, and we watched as scores of the lanterns floated up into the sky past the full moon. The night was warm and beautiful. It was a memorable New Year’s after all.

We are now in Chiang Rai, a small city not far from the border. Our Thai visas expire in a few days, so we’ll be moving on to Laos shortly.