I was going to say that Thailand is a feast for the senses. But in our experience so far it is more like diving face first into a buffet.

All the senses are indulged and stimulated to the point to where it is difficult to savor anything in particular. Sights and sounds, smells and tastes all mingle together. And if it all gets too exhausting one is never far from a row of comfy chairs lining the street with masseuses eager to rub your feet, back, shoulders or whatever. That’s about as sensual as it can get. But I am getting ahead of myself.

We arrived in Chiang Mai via sleeper train from Bangkok a week ago. We missed a lot of territory between the two cities, which is unfortunate. But we’ve enjoyed Chiang Mai so much that I know we would have regretted having less time to spend here. I don’t know how long we would have to be here before feeling that we’ve had enough, but we won’t get the chance to find out.

Chiang Mai is still a good-sized city, about a quarter the size of Bangkok at 1.6 million. But it feels manageable. Part of it, the “old city,” is surrounded by a moat. It is still a pretty big area, but at least you can walk from one side to the other in a half hour or so. Or at least you probably could if it weren’t for all the restaurants, shops and Buddhist temples to distract you.

Walking isn’t strictly necessary; there are plenty of taxis and tuk-tuks, the three-wheeled motorcycle contraptions, cruising around everywhere—and contributing to the general traffic problem. Just getting across streets can be a real challenge, but the vehicles—cars, taxis, tuk-tuks and motorcycles (there are about as many motorcycles as cars)—seem to be pretty good at avoiding pedestrians.

I mentioned sensual feasts. There are also literal feasts. Food is a big thing here. Seems like everyone is always eating, Us too. We’ve heard that travelers loose weight in Southeast Asia. But I don’t see how that would be possible in Thailand. Eating is as much, or more, entertainment as nourishment. I’m sure we could cut our food budget in half if we ate only when necessary.

We took a one-day Thai cooking class where we spent the day preparing, and eating, a several course meal. It was great fun, and at the end of the day we not only felt stuffed, but we had an appreciation for how fresh and basically simple Thai food is. We’re hoping we can remember enough to cook some at home. 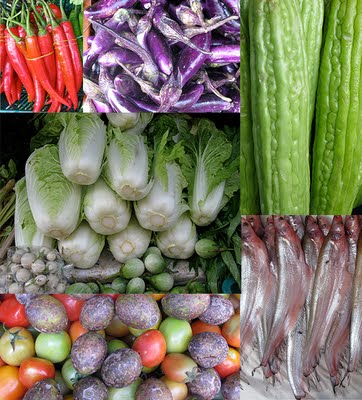 We started the class by visiting a market to get the ingredients for the dishes we were going to prepare—ginger and turmeric roots, coriander and lime leaves, lemon grass, garlic and chilies. That is what Thai’s typically do, buying a little of this and a little of that to make the day’s meals. Or at least the ones that cook at home do. With so many street vendors selling prepared food I wonder whether anyone actually cooks at home. Why would they bother?

Anyway, we shopped for ingredients, and were able to get the teacher to identify a lot of things we didn’t recognize. Just the display of the vegetables, fruits, fish and other things were very attractive. Some of the vendors prepare little bundles of the fresh ingredients for soup. Just chop it up and cook it in a little coconut milk and you’ve got Thai fast food.

There are basically two kinds of markets, the “daily” markets where one buys food and household stuff, and artisan/product markets, aimed mostly at tourists and other shoppers. In Chiang Mai there is a big “night market” every night of the week that fills the sidewalks and a few mall-type areas along several blocks. And in another part of town there is a Sunday evening market that takes up a whole street for probably fifteen blocks. Both markets get so packed it is nearly impossible to walk. For both, vendors set up in the afternoon, and sometime before morning, disappear.

There are plenty of crap vendors, but a large percentage of the things sold are of remarkable artistry and quality. With so much to see it is easy to overlook just how good much of it is. You almost have to force yourself to stop and look at certain things and temporarily ignore everything else.

One of the most amazing and inexplicable things I’ve ever seen are the portrait artists. There were some very good ones doing quick drawings at the Sunday market. But the ones that really astound me are the ones in the nightly market who do portraits from photographs. I think they were using graphite pencils and brushes; the portraits look almost photographic. What I find inexplicable is that there are at least a couple dozen of these artists—mostly men, but a few women. I could understand one or two exceptionally talented people doing that caliber of work. But so many just defies explanation.

The Buddhists temples—and there a lot of them—are a visual feast, with ornate architecture and very intricate carvings covered in gold leaf. And, of course, lots of gold Buddhas.

Evidently 95% of Thailand is Buddhist, and the general outlook that Buddhism inspires is evident in the attitudes and actions of the Thai people. As opposed to the religions most westerners are familiar with, Buddhism is a very personal religion. It is focused primarily on becoming a better person, and encourages common decency towards others. That is an oversimplification, but it is the general idea.

Buddhist monks are not “caretakers of the flock.” In fact the “flock” takes care of the monks while they study and internalize Buddhist values. Thai people basically feed and cloth the numerous monks, giving them food, and voluntarily supporting the temple universities. While caring for monks is considered meritorious, becoming a monk is even more meritorious. 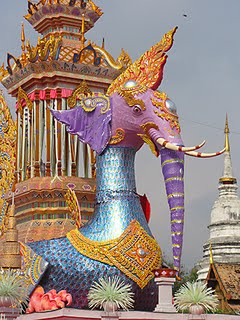 Some are monks for just a short period, perhaps as a child. Others study for several years and return to civil life as young adults. I don’t know the percentage of Thai males who are monks at some point in their lives, but it is pretty high. Even the Thai king was a monk for a while.

Of course, many remain monks for the duration of their lives. We attended some ceremonies for a venerated monk who recently died in his 90s. His remains were cremated. We didn’t see that, but his funeral pyre may have been the psychedelic flying elephant that had been built at his temple. Elephants are the national symbol of Thailand. There are elephant images and figures everywhere. But this colorful winged elephant was really something. Made me think the old monk was going to go to Nirvana (or wherever they go) with a smile on his face.

With some reluctance we are leaving Chiang Mai to go further north into the mountains, to Pai. Everyone says it is beautiful, so even though we’re sorry to leave Chiang Mai, we are looking forward to Pai. We’re going to have to come back to Chiang Mai for a few days before we go on to Laos so I can get some dental work done. Talk about mixed feelings!