With this most recent leg of the trip in Myanmar, I feel like we are finally getting off the beaten path a bit. Feels good. 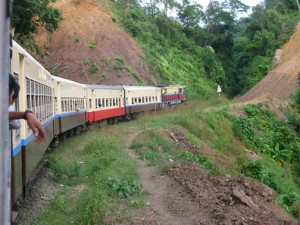 Train from Mandalay to Katha (Nabar).

The train trip north, out of Mandalay, was adventurous mainly in its uncertainly. We were scheduled to leave at 4:30 a.m., and had gotten up at 3:00 to be at the station in plenty of time. Which we were, and more. The train finally showed up around 6:00, and we left a half hour later, two hours behind schedule.

The scenery along the way got better and better as we chugged north, at a stately pace of about 20 miles an hour. Even at that speed, the rail cars rocked so much at times I was all but certain we would roll off the tracks.

At one point, in a very pretty spot in the middle of nowhere, we came to a full stop and waited for most of an hour. No idea why, but workers with bags of tools and a few parts hustled back and forth past us down the aisle. It was almost a relief to not be bumping along. I stood in the doorway between the railcars and looked at the forested area around us, thick with bamboo, teak and other foliage. Frangipani blossoms scented the fresh air. 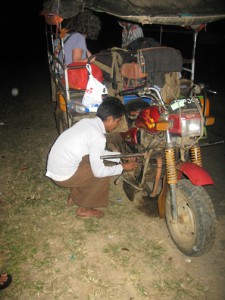 We finally reached our stop four hours later than scheduled, well after dark. By then there was no public transportation from where we got off the train to our final destination, the town of Katha (ka-TA) on the Ayerwaddy River. So we hired one of those motorized mules of a vehicle, basically a cart grafted onto an underpowered motorcycle. Our cart was a particularly poor specimen. Within seconds of taking off we had to stop for repairs. And all the rest of the trip, which took about an hour, the poor thing sputtered and threatened to die entirely. It didn’t help that the road was mostly potholed dirt. We bounced around even more than we had on the train.

Up until this point the places we’ve stayed have been nicer than usual, with a bathroom, A/C, and even television–and quite a bit more expensive than we want to pay. But lodging for foreigners is tight in the new Myanmar, and you take what you can get, even if it is luxurious. In Katha however we were shown a small room with just a bed and a nightstand. The “facilities were down the hall–squat toilets and bucket baths. The panel walls were so thin we could hear our neighbors breathe. A Jerusalem cricket hurriedly crawled under the bed. When we saw it my comment to Faye was “This looks familiar.” And at $12 a night it was less than half of what we’ve been paying. (I think I would have paid a little more for a western toilet!) 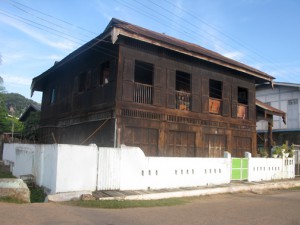 Katha is a very pleasant town, right on the river, with a population of about 12,0000. There is a sprawling street market and several pagodas (though, at this point, I’d be happy to find a place without pagodas.) There are also a number of nice old teak houses. Katha’s main claim to fame, among westerners at least, is that George Orwell wrote his first novel, Burmese Days, based on the time he was a stationed in Katha with the Indian Imperial Police, 1926-27. He is better known, of course, for his later novels Animal Farm and 1984. But Burmese Days is an interesting semi-fictional portrayal of a small group of British civilians, under the protection of the Empire, involved in the teak harvesting industry. Teak harvesting is still one of Myanmar’s major industries and we’ve seen piles of hundreds of teak logs, some of them two or three feet in diameter. 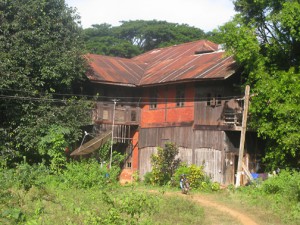 The house George Orwell lived in during his days in Katha, Burma (Myanmar)..

Orwell was a keen observer of the arrogance of the British colonists and the effect it had on the subject populations, as well as the corruption of local Burmese officials who used the British for their own ends, often to the detriment of their own people. It is particularly interesting to read the book while in Myanmar and speculate on how the echoes of that era still effect things in this country.

Whenever we are in a new town we like to just wander around the streets and markets, looking at stuff and meeting people. Foreigners aren’t unknown in town, but still relatively few. As far as we could tell there were only a handful of other foreigners in town when we were there (we were the only foreigners on the train.) Wherever we walked people smiled, waved and said hello, either in English or Burmese (oh, those smiles…).

We stumbled across a place called “For Coffee Lovers.” Normally whenever you ask for coffee in Myanmar you get a powdered mixture of instant coffee, creamer and sugar. It’s not bad, but it’s not coffee. Miraculously, this shop served real coffee–with freshly ground beans and an espresso machine. The electricity was out, as happens a lot in this country, so the owner had to start up the generator to make my cup of coffee. To make it worth his while I had two cups.

He was an interesting guy who spoke enough English that we could learn a little about him. He told us that he and his wife were anti-government demonstrators in the late 80s, which was a tumultuous time in Myanmar. Aung San Suu Kyi came to Katha in 1989 during her campaign as the leader of the New League for Democracy (NLD) party. He proudly showed us a picture taken of her with him and his family. In the election that followed the NLD won the popular vote, but the military invalidated the election and kept Aung San Suu Kyi under house arrest for most of the following 20 years.

She was released two years ago, and shortly after won a seat in Parliament. Since then she has traveled around the world, garnering awards and educating westerners about the realities of the situation in Myanmar. It is more complex than many want to believe. Things are not as black-and-white as they may look from a distance.

But in Myanmar, for the first time in many decades, or perhaps ever, people have hopes that real democracy will come to the country. It may be a long process. As the owner of the coffee shop said “In the 80s we had revolution. Now we have evolution.”

He made another interesting observation about democracy. He told us that while he was a young revolutionary, his older brother had been a military officer. But they were still brothers. “Democracy is like a family,” he said. “There are differences, but we are still family.” That is about as good a description as I’ve heard, and something to remember back home where things seem to be getting more polarized all the time.

It was one of those special encounters that means a lot to the traveler, a personal connection that helps us understand the people of where we are. The evening of the same day we had another amazing encounter. We were out walking around and we were approached by two well-dressed women about our age. One introduced herself as an English teacher, and said the other woman was her student. We learned later they had been friends since childhood. 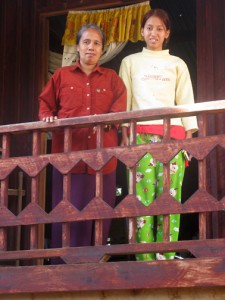 English teacher and her niece in Katha, Myanmar

After chatting for a few minutes the English teacher asked if we would come to her house for breakfast the next morning. We were thrilled for the invitation and accepted. We continued walking to the outskirts of town together with the women, and before long we were invited to sit down and eat a meal of Burmese food. Of course we accepted, and we stopped by a street side vendor and the women ordered for us a supper of noodles topped with vegetables, chickpea powder and fried bean cakes. It was delicious and something we would never have known how to ask for.

We returned to town, and the other woman, the student, invited us into her home for snacks and more conversation. She lived in one of the beautiful teak houses we had admired earlier in the day. It was really interesting to see the inside, which was mostly one large room, open to the rafters. The house was built by her brother, who was there. He pointed around the house and made hammering motions to indicate he was the one who built it. People often mime to communicate with us and we didn’t realize at first that he was deaf-mute. When the English teacher told us his condition we told her it didn’t make any difference to us. If anything we could understand him a little better than most people here we try to communicate with.

After wondering around Katha for three days we boarded the boat to take us down the river, back to Mandalay. It was an experience–which is what you get sometimes when you were hoping for something else. But I’ll leave that story for next time. —-[More photos]