I read an account recently of a boat trip similar to the one we took from Katha to Mandalay. It was described as “not to be missed…and not to be repeated.” That is exactly how I feel about it. 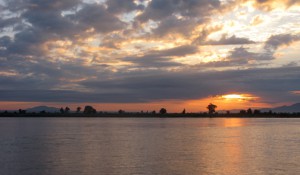 I had visions of a leisurely multi-day trip down the Ayerwaddy River past scenic countryside and rustic but quaint villages in a semi-comfortable craft, or something like that. The reality was a bit different.

The boat that would take us down the river arrived about 6 p.m., a couple hours later than scheduled (it is a pattern here.) It was a triple-decker ship, built basically for hauling cargo. On this boat, in addition to actual cargo, people were treated as cargo as well. 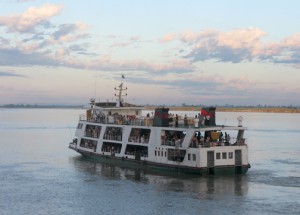 The government boat from Katha to Mandalay

There were a handful of basic cabins, costing four times a spot on the deck. It was a ridiculous price for what you got, so we elected to get down with the people and go “ordinary class,” which entitled us to whatever space we could find amongst the people on the the already crowded deck (many were already on the boat from further upstream.)

We had some forewarning, and had bought a blanket and some padding which would serve as our bed. When we first boarded we were completely stumped as to where we could settle down, but a young man finally took us over to a spot in the corner, made a couple other people move, and indicated that we could claim that spot. We plunked down our backpacks and spread out our bedding and made ourselves as comfortable as possible on the steel deck. 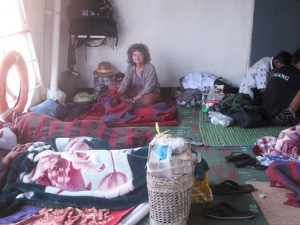 Our accommodations aboard the boat from Katha and Mandalay

Next to us was a group of seven young soldiers returning from the fighting in the northern part of the country. Two were wounded, with bandages on their feet and other parts of their legs. Whenever we felt uncomfortable we thought of them, laying there in the same conditions we were, but nursing bullet wounds.

Darkness settled in quickly after we boarded and we bedded down. With the help of ear plugs (essential for this kind of travel) we were able to sleep off and on through the night. At one point in the middle of the night the boat stopped by some sort of industrial plant, and the air was filled with one of the worst smells I’ve ever smelled. It was the odor of pure evil. I buried my head in the blanket, but it was of little use.

The next morning, even though nobody had anything to do all day, everyone around us was awake and at their morning routine at 4 a.m., as usual. A family of Muslims quietly chanted their morning prayers. A group of monks left their sleeping platform with empty begging bowls and returned with full ones. We felt like death warmed over but most others seemed almost in a festive mood, chatting away as they groomed themselves (and each other, looking for headlice). 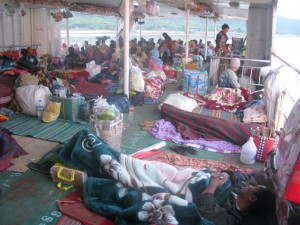 Throughout the day it was truly amazing how the locals continued to follow their daily routine. Meals were prepared and consumed; in the afternoon women wrapped in their bathing outfit bathed from a bucket and a spigot of river water with a bowl to dump water over themselves. In Myanmar both the men and women traditionally wear a tube skirt, called a longyi, from the waste to the ankles. For bathing the women wear a similar thing, but hitched up to their armpits. It is modest, but looks impossibly awkward. But it probably was a step up from bathing at the edge of the river as the women who live near it usually do (we saw plenty of that–people bathing, washing dishes, doing laundry, brushing their teeth, all in the Ayerwaddy River.) We weren’t about to bathe in that water under any circumstances. We were pretty much paralyzed by how primitive the conditions were, but around us everyone else was living their life as usual.

Not that the trip was completely uninteresting. There were a couple of nice sunsets. We got a glimpse of some rare Irrawaddy Dolphins, and passed a bridge that had collapsed in the Nov. 11 earthquake, killing 5 workers. But as far as scenery goes, not much to look at. 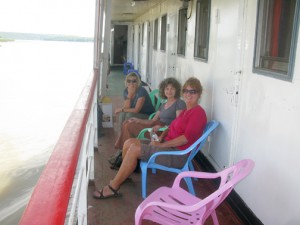 We spent only one day and one night on the boat–shorter than we had anticipated, but more than enough. Some friends we had met in Katha had chosen the cabins, rather than the deck, and we visited them frequently. And out of pity, no doubt, they occasionally came to visit our humble corner of the deck. If I were doing it again I think I would spring for the cabins. But it certainly was an experience. Not to be missed, and not to be repeated.

We have moved on to the southern part of the country, a narrow strip of land that shares a long border with Thailand. Looking at a map it looks like it would be so easy to get to Bangkok from here, but it won’t be until the rules in Myanmar regarding overland crossing of borders are relaxed. Someday…. —-[More photos]