We spent the last week of this trip to Myanmar on the peninsula south of Yangon, bordered by the Andaman Sea on the east and Thailand on the west. 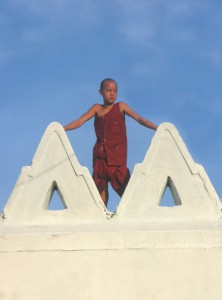 The capitol of the area, and Myanmar’s fourth largest city, is Mawlamyine. It is the southernmost place in Myanmar we visited. Coincidently, in addition to Katha, the furthest north we got, it is another place that George Orwell was stationed in his service with the Indian Imperial Police. Mawlamyine (then called Moulmein) served as the capitol of British Burma from 1826-1850.

There are still a number of colonial buildings around from that era, and many are being used as government offices today. Those that have been maintained (a constant chore in this climate) look quite attractive. Another British legacy, and a common one, is a large and still functioning prison.

The man known as America’s first missionary, Baptist Adoniram Judson, spent more than half of his nearly 40 years in Burma in Moulmein. He had little success with the ethnic majority Burmese (or Burman or Bamar) people, who were Buddhists. The Burmese still comprise 80% of the population of Myanmar. But he did Christianize some of the ethnic minorities, many of whom were animists, most notably parts of the Karen population, who live in eastern Myanmar. (“Karen” is a loose designation for a broad group, some of whom don’t have much in common with each other.)

Judson had come to Burma around 1812, and had the misfortune of getting caught in the first Anglo-Burmese War. In 1824 the Burmese arrested him as a British spy, and he spent a year and a half imprisoned in wretched conditions, mostly in shackles. Judson moved to Moulmein in 1827, not long after being released. By then it was the capitol of British Burma, and he made progress Christianizing some of the local majority Mon ethnic group.

Today there are still a couple of large Baptist churches in town founded by Judson (as well as two Roman Catholic ones, presumably founded by someone else.) And, of course, the usual plethora of golden pagodas, a smattering of ornate mosques topped with minarets, and handful of Hindu temples decorated in pastel colors and covered with characters from Hindu cosmology.

Rods dipped in colored latex dry in the sun before being sliced into rubber bands.

On a day trip over to nearby Ogre Island (a picturesque translation of the local name, which is closer to “Giant Island”) we took a horse cart around the rural countryside and villages, visiting a few cottage industries. The most interesting was a rubber band producer. We had trotted past groves of rubber trees and I had wondered aloud what the rubber was used for. I had never given any thought to how rubber bands are made, and seeing this operation was one of those “aha!” experiences. (To see more photos, click on the link at the end of this post.) 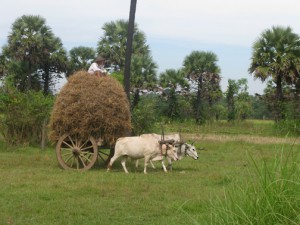 Oxen pull a cart loaded with rice straw across a field near Hpa-An, Myanmar.

Our final stop before returning to Yangon was Hpa-An, which is OK, but I wouldn’t put it very high on a list of places to visit. The surrounding countryside is nice and there are the usual pagodas and Buddhas scattered around in picturesque places. There used to be a nice boat ride from Mawlamyine to Hpa-An, but that has been suspended.

So, that is the end of the travelogue for the Myanmar part of our trip. I have another post ready to go with some history and perspective I’ll put up shortly. Feel free to skip it if you are not interested in that kind of thing.

I am going to tack on here at the end of this post a few little things that didn’t fit the flow of the earlier posts, but I think are worth including.

—We were eating in a local restaurant and an elderly monk came over to us, which is quite unusual. He took my hands and peered at my palms. (Who knew monks read palms?) He told me that I would have a long life, and that another beautiful woman would come into my life. He sort of chuckled and wondered off. I had mixed feelings about his revelations. A beautiful woman coming into my life sounds like a good thing, but considering I already have one (who was right there when he said it) it will likely cause trouble. And a long life under such circumstances might not be as attractive as it would be otherwise.

—When traveling sometimes one hears English mangled in interesting ways. A couple of my favorites came from the English teacher in northern Myanmar I mentioned in an earlier post. While we were walking down the road with her and her friend she turned to us and asked, “Is it possible we are wasting your time?” I knew what she meant and assured her she wasn’t. But I think it is a good question to keep in mind whenever in the company of others.

Not long afterward, when we went back to her friend’s place for snacks and conversation she stood up and said to Faye, “Would you like to come piss with me?” Though I still don’t understand why women go to the washroom in groups (or to the squat toilet in this case), at least she was refreshingly forthcoming about the reason for going at all.

—I’m sometimes asked what the food in Myanmar is like. It is similar to other SE Asian cuisines; rice or noodles form the bulk of nearly every meal. Breakfast is usually some kind of noodle soup. The other meals are usually a pile of rice with a variety of small side dishes scooped from large simmering pots. Then it is mixed together, to taste. Burmese food tends to be rather bland. More interesting are some of the ethnic foods that have come with various migrations, such as Indian and Chinese. It is easier to describe Thai food. Nearly ever meal I’ve eaten in Thailand I have thought, “This is delicious!” In Myanmar, on the other hand, what I often think is “Not bad, I hope it doesn’t make me sick.” (For the record, I never got sick. Faye did once.)

We fly back to Bangkok for one night, then on to…..a surprise destination. Stay tuned. —-[More photos]