Joseph Stalin said that a single death is a tragedy, a million is a statistic. When people talk about Guatemala’s “civil war” it is usually in statistics—30 years of fighting, some 200,000 killed or missing. (I put “civil war” in quotes because it is a misnomer; it implies two opposing sides more or less equally matched. The guerilla forces never numbered more than 5000 even at the height of the fighting in the early 80s, and that number was divided among four mostly unrelated groups. The government reaction was not so much a fight as genocide.)

One of the areas of the most activity was in the remote area known as the Ixil triangle, called that because the Mayas of that small and remote area speak a language by that name. During our stopover in Nebaj, the largest of three small towns that make the points of the triangle, we spent part of a day with a young man, Gaspar, who told us a lot more than mere statistics could.

For a period of about 15 years during the 70s and 80s the Ixil triangle was off limits to foreign travelers. The guerrillas hid in the rugged mountains and came into the village to get food and 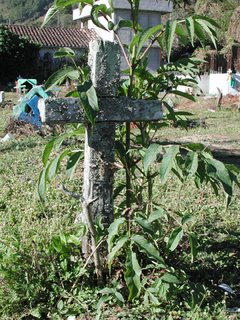 In the 1984 Gaspar was a boy of 11, living in Nebaj with his parents, three brothers and two sister. The Guatemalan Army killed everyone in his family except him. He, along with more than a dozen other children who escaped the slaughter, along with a handful of adults fled the village and the violence, and for the next six months made their way through the mountains into Mexico. He lived there until the peace accord was signed in the mid-90s, which brought an end to the fighting. Along with many other refugees he returned to Nebaj to start over with little or nothing.

Gaspar showed us a cemetery where 1200 victims of the fighting are buried, mostly nameless. He said he doesn’t know whether his family is in any of the graves or not. The remains of bodies are still being found, sometimes in mass graves. He took us to a memorial to some 250 children who were killed, where crosses are piled up before flickering candles. 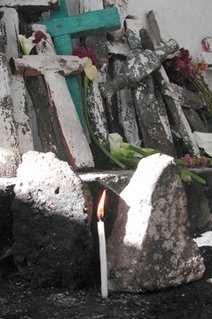 In a recent irony General Otto Molina campaigned for president of Guatemala in Nebaj last year. He talked about his role in the fighting, saying that he had come to the area to teach the residents how to defend themselves. We ran into an old gringo who has been in Nebaj for 30 years. He shook his head and laughed when he told us about General Molina. The last time he saw the General in Nebaj, in the 80s, Molina was shooting the Mayas. Maybe that is what Molina meant about teaching them self-defense.

Molina was the candidate of the “Patriotic Party.” The symbol of the party was a clenched fist, and the slogan was “A Strong Hand.” In the election run-off he was favored to win, but a larger than usual turnout of Mayas in villages such as Nebaj defeated him. Maybe they learned self-defense after all.