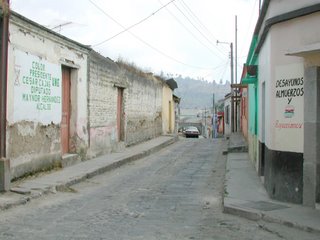 We’ve spent the last twelve days in the highland city of Quetzaltenango, a name that is a mouthful to say and even harder to spell. It is known more by its original Mayan name, Xelajú, shortened to Xela (SHAY-la). At over 7000 feet, the air is cool at night, and our cardiovascular systems get an extra workout as we walk up and down the hilly cobblestone streets. It is a pretty decent city by Central American standards, but we probably wouldn’t stay long except that my four godchildren live here with their older brother and parents.

The kids are all in their teens now except for the youngest, Sarita, who is nine. Yessica is 13, Winston is 15 and Angelina is 18. The oldest boy, Rolando, is now 20 and studying computer science in university. Angelina wants to be a doctor and will start taking some pre-med classes when school starts on Monday. Winston is interested in architecture. I don’t know what Yessica and Sarita will want to do, but their older siblings are setting good examples for them.

They’ve come a long way since I met them in the village of San Antonio Palopó on Lake Atitlan 12 years ago; they were living in a one-room house with dirt floors, mud walls and one bed for the whole family. But the place was tidy, and it was clear they were making the best of it. They are in a much better situation these days, with a decent little house of their own here in the city, with several rooms and beds for all.

The one bad thing about the kids growing up is that it is getting harder to entertain them when we come to visit. Or maybe it is getting harder for them to entertain us. Xela isn’t exactly Disneyland; there is a rather sad zoo with a handful of bored monkeys, a pair of equally bored but magnificent jaguars (native to Guatemala), assorted ducks and geese, and a crowded pen of rabbits, doing what they do best. There was a mangy lion, but it died. We went there first thing

when we got here; after that it has been a challenge to know what to do.

A few days ago Faye expressed some interest in learning to make tamales, so Carmen, the kids’ mother, invited us over to their house for a couple of hands-on lessons. Faye did pretty good; I’m hoping that she’ll remember what she learned after we get back home.

One of the best things around here, in our opinion, is the hot baths in Almolonga, a village a few miles out of the city. The kids are not accustomed to hot water, or at least what we consider a decent temperature for a bath, so Faye and I went to the baths without them. The baths are rather basic—concrete and tile rooms. But there is plenty of space for two (or more) people to submerge in the gloriously hot mineral water. Whenever we are there soaking we say we should come more often, like once a day, but we usually only make it once a trip.

The place we are staying is a bit of a dive, but cheap ($8 a night for two). We stay here every time we come to town, but keep vowing we’ll find someplace better. The sheets don’t quite fit the bed, the electricity is off and on, and the showers are heated with electrical devices I call “widowmakers,” which are part of the showerhead. Imagine water running through a toaster. It has been a while since I actually got shocked during a shower, but it has happened.

So far on this trip we’ve been in very familiar territory. The next couple of weeks we’re going in search of places we’ve never been. Our first stop will be an area known as the Ixil Triangle, a mountainous area known not only for its beauty, but for its violent past, both during the Spanish conquest and more recently during Guatemala’s civil war.

Speaking of politics, the new president, Alvaro Colom, gets inaugurated tomorrow. We’ll see if he can live up to his promises.