I’ve been fascinated by the history of Eastern Canada and the Atlantic provinces. There are old buildings with dates I’ve seen only in history books. In places entire neighborhoods, perhaps out of simple neglect, have survived urban renewal and look like a set for a historical drama. If only they could talk.

Whispered stories fill the air in small cemeteries scattered around the countryside. Some headstones have little more than a name and date. Some hint of tragedy and the harshness of life a century ago; other inscriptions suggest an intriguing story such as the woman who, after one husband died “after an illness of 14 days”, married another man of the same last name, perhaps his brother.

The history of Acadia, as Nova Scotia was called by its original French settlers, is particularly interesting. The French and English fought numerous battles for control of the area in the 1600s. The English eventually prevailed and the territory became known as Nova Scotia (New Scotland).

There are still remnants of Acadian houses, and even some settlements populated by the descendents of the first Acadians. But in the 1750s the English expelled many of them. Some migrated to the territory of Louisiana, which was French at the time. There, the Acadians became known as Cajuns, and still speak a French dialect today.

The oldest permanent settlement in Canada is Annapolis Royal, near the southern end of Nova Scotia, founded in 1610. The French had built a settlement nearby a few years before, but it was destroyed by the English.

We took the three-hour ferry ride across the Bay of Fundy from St. John, New Brunswick, to Digby, a few miles from Annapolis Royal. The cold rains that had started a few days before had let up, and the day was fairly sunny and calm. The barf bags scattered around the ferry indicated that some crossings were not so smooth.

Had the water been rough we could have driven from New Brunswick. Nova Scotia is connected to the mainland by a narrow strip of land at its northern end. I’m sure within a century or two the Bay of Fundy will become the Strait of Fundy and the province will be cut off. Or, more likely, the waters of the Atlantic will rise and accomplish the same thing in a much shorter time.

We spent the first two nights near Annapolis Royal with Faye’s former mother-in-law, a very nice woman with a charming English accent with whom Faye has remained friends. She and her daughter’s family live in the country near the water where there are still remnants of dikes built by Acadians. Just down the lane is a small cemetery with headstones dated as early as the late 1700s.

In the early days Nova Scotia became a center for boat building, sea trade and fishing, particularly for lobster. Fishing is still a major occupation. (Nova Scotia is the only place I’ve seen lobster burgers on restaurant menus.) 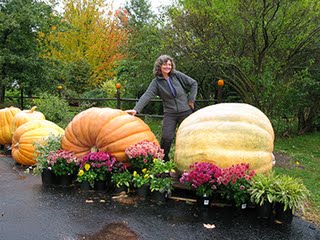 Inland, there are fields as fertile as the sea growing, among other things, pumpkins big enough to climb into. Every year in the fall there are pumpkin boat races near Halifax, where hollowed out pumpkins are paddled across the harbor.

We didn’t spend as much time in Nova Scotia as we would have liked because of a cold drizzle that came and went. We stayed near Halifax one night and explored the city for most of the next day (unfortunately a Sunday). Halifax reminds me of a smaller version of Boston, probably because it dates from the same era, with historic old buildings of a similar vintage. The oldest Protestant church in Canada is there, built in 1750, still a magnificent building. There is a plaque in the church commemorating two sailors buried there who were killed in a battle against the American warship The Chesapeake in 1813.

By the time we got back to New Brunswick the sun had returned and we took some back roads to the area where the more respectable, English side of my father’s family settled. I found the grave of my great-grandmother, who died in 1900, and mention on a monument of a great-great-great grandfather who was one of the first settlers in a small community founded in the late 1700s. There were others to whom I am sure I am related, but it will take some more work to figure out exactly how. 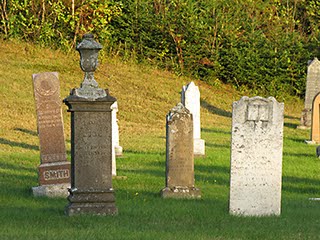 I’ve always thought cemeteries were interesting, but wondering through the graves of my ancestors was quite an experience, enough to make me feel at least partly Canadian.

We had hoped to visit Quebec City and some other parts of the province on the way back, but decided we’d return again earlier in the season when the weather was better. Instead we drove straight through from western New Brunswick to Faye’s brother’s “cottage” in Ontario.

So, the cross-country Canada part of our trip is over (except for the part next spring when we drive back to British Columbia), but it was just the first leg of our journey. The next part will be something completely different. Stay tuned.