I am already nearly a week into phase two of this year’s trip: Last Monday I flew from Canada to Guatemala, where I’ll be spending the month of November.

I’ve been to Guatemala many times over the years, and it is a familiar place for me. Coming here seems not so much a trip or vacation as it does a parallel reality. It is like the difference between a dream world and a waking world. Which is which—which seems more real—depends on where I am.

For the first few days here I feel fuzzy headed. At night sometimes I am unsure of where I am (or totally at a loss). But then things solidify and come into focus. I recognize old friends, they recognize me, and I am ready pick up where I left off. The awareness of the other world fades and I begin having trouble remembering names and details from that side of the divide. Time seems to pass not in a straight line, but in loops on either side of the line.

I’m here a couple months earlier than usual. By now the rainy season is usually over, but there has been heavy rain off and on since I got here. This year the rainy season was unusually dry—the corn crop suffered. Everybody is shaking their head and mumbling about the changing climate. For a culture that is so heavily dependant on agriculture, such climate changes can be disastrous. A corn shortage will mean higher prices, and that means more people will go hungry. 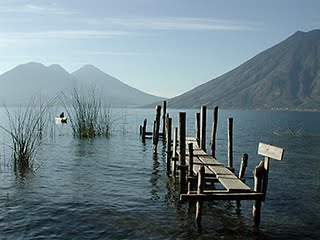 I spent the first few days back in Guatemala in Panajachel, on the shore of Lake Atitlan. The lake is famously known as the most beautiful lake in the world. It is certainly one of the most impressive, with its deep blue waters and backdrop of volcanoes. But for a variety of reasons, nearly all man made, beautiful blue Lake Atitlan is turning brown, and in some places the shoreline is mucky and smelly. There are signs warning people not to swim in the water.

There has been plenty of finger pointing and rationalizing, but the reality is that the quantity of phosphate fertilizers, soaps and untreated sewage running into the lake has triggered a tipping point, and the lake is dying. There are some hopeful signs that authorities are taking the problem seriously and are preparing to do something about it. Aside from the ecological disaster, the longer the condition persists the more impact it will have on tourism, which is a major source of income for the country, particularly the Mayas who live around the lake. It is certainly in everybody’s interest to solve the problem rather than ignore it, as they have done for too long.

After a few rainy days in Panajachel, too cold to go swimming even if it were advisable, I took the bus up to Xela. Friends and readers of my past entries will know of my relationship of many years with a family here—four godchildren—a boy and three girls, plus their parents and an older brother. This has been a year of changes for them as well.

A few months ago the father made his way to the US, by foot and by bus, and is working in the tobacco fields of South Carolina. What possessed him to do that I have no idea. But I know the global economic trouble has had an impact in Guatemala. Desperate times call for desperate measures.

On the brighter side, the older brother, now 22 and still studying computer science in university, has a new wife and six-month-old daughter. I can’t believe he grew up so fast, but other than that it feels remarkably reassuring to see the oldest of the kids starting his own family. Life goes on.

The oldest of my godchildren, almost 20, graduates from her medical course this month and has been interning at a clinic in a nearby town. I believe she plans to continue with her medical education. Needless to say, I feel very proud of her.

The boy, second oldest, is at the point where he will have to choose a career and start taking specialized courses. He hasn’t quite decided whether he wants to be an architect or engineer. The two younger girls can put off such decisions for a little while longer, but they are doing well in the courses they are taking.

I don’t think any of them will have to contemplate being an illegal laborer in the future. Their parents, who have just a second grade education, had high hopes for them years ago when they first came to me and asked for help. I think we all can be happy with the way things have developed. The kids have a ways to go yet, but they have worked hard and have accomplished a lot.

I’m not sure what is on my agenda for the rest of the month. I know there will be a graduation party back in the village the family came from later this month. That should be fun. Hopefully the sun will come out sometime soon.