One of the challenges of bus travel in Central America is making it to your destination without having to go to the bathroom. It is agonizing to be bumping along with a full bladder, playing mind games and calculating the seconds before the next stop.

It is a problem all passengers face, of course. I don’t know how the locals cope with it; on travel days we try to limit our fluid intake before getting on the bus, then hope for the best. But there are times when that just doesn’t work out.

There are more options for men than women, for obvious reasons. If the bus stops for any length of time, sometimes you can jump out and take matters into your own hands, so to speak. Public urination doesn’t seem to be frowned on quite as much in Central America as back home. But if a driver doesn’t want to stop, what can you do? That is not a rhetorical question; I’ve pondered it many times as I’ve squirmed in my seat. Recently we saw a novel solution (for a man anyway). 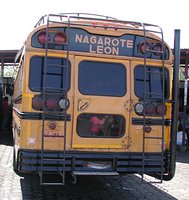 One of the modifications made to many of the old school buses which serve as public transportation here is ladders up the rear of the bus, on either side of the rear door, which go up to the cargo rack on top of the bus. Every bus has one or two helpers who climb up and down the ladders to load and unload cargo. Another modification is a step under the rear door. Elsewhere considered an emergency exit, here the step allows people to regularly get on and off via the rear door. (More than once I’ve chased a moving bus, thrown my pack into the open door, grabbed the ladder and jumped onto the step–another reason to pack light.)

If I ever doubted the usefulness of these modifications, I don’t any more. A week or two ago we were were riding in the back of a bus. One of the helpers was standing by the rear door, jumping out when there was cargo to deal with and helping people in and out. A man near us evidently informed him that a crisis was approaching and as the bus stopped to pick up a passenger getting on in the front, the helper indicated that the man go out the back door. The man stepped out and started to jump down to the ground, but the helper said, “No, no, just stand on the step!” After a few seconds the bus took off again with the guy still standing on the step, holding onto the ladder with one hand, and with the other…

I would think it would take a certain amount of panache to pee from such a precarious position. But maybe the man was in touch with his inner child and thought it was fun. It looked kinda fun to me. I can hardly wait to try it sometime.