The first couple of weeks in Nicaragua we took the roads less traveled—by foreign visitors anyway. There were always plenty of locals. For the last two weeks we abandoned the search for culture, hidden hotspots or something of even moderate interest, and instead went to the beach. Actually two beaches, just about as different from each other as possible, one on the ocean, the other on a lake.

There are a string of nice beaches all along the Pacific Coast, mostly undeveloped or barely. Some stretches, mostly in the south, near Costa Rica, are being developed into instant communities marketed to foreigners. Further north is the resort of Montelimar, formerly the dictator Somoza’s private paradise. The Sandinistas used it as a military base for a while, but now there is a luxury hotel there where rooms go for over $100 a night—a bit out of our price range.

On the recommendation of some travelers we met along the way we went to Las Peñitas, on the northern coast, west of León. There, comfortable accommodations go for about $15 a night. We stayed at a place owned by a Canadian couple that had large rooms with a giant sun painted on the floor. When you’ve stayed in too many rooms with just the bare essentials, touches like that can make a big difference. (You can check out their website here.) They had good food too. 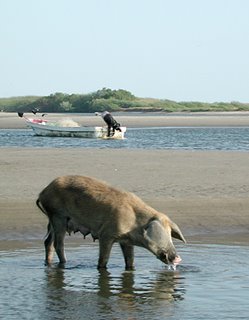 Since this is Central America there were the occasional pigs wondering the beach, but for the most part the beach was deserted. We spent more time in the hammocks than on the beach though. I read two books in four days.

We came back south to Granada for Faye’s birthday, then moved on to the island of Ometepe in the immense Lake Nicaragua. The island is formed by two volcanoes, linked by a fair amount of flatland around them. One of the volcanoes is still active and last erupted in 1957. (No 50th anniversary rumblings.)

It is a pretty good sized island, with three towns and several small communities, with a total population of about 35,000. Being an island, it is geographically isolated from the rest of the country, and was largely insulated from the trauma of the war years. The people seem more relaxed than on the mainland.

The island is rural, with banana fields and miles of pasture. Coffee is grown on the slopes of one of the volcanoes. In spite of fences around the pastures, livestock seem to roam free. On a ride around the island the bus had to thread its way through or around several herds of meandering cows, and swerve around horses wandering down the road.

There are also spider monkeys and howler monkeys. From where we stayed we could hear the demonic roar of the howler monkeys at dusk and dawn. From their sound you would think they were the size of lions, but they are cute little things no bigger than a poodle.

The lake is tepid and murky. It may be cleaner than it looks, but between the livestock wandering along the beach and into the lake and the women washing their clothes just offshore, we weren’t really tempted to go swimming. But it was, for the most part, a peaceful place to hang out for our last few days in Nicaragua. The only stress came from trying to avoid a pair of attack geese who patrolled the area looking for trouble.

So, that’s about it for our trip to Nicaragua. We’re spending the last night at an overpriced hotel across the road from the airport in Managua. Faye flies home tomorrow; I’ll spend a couple days on the bus back to Guatemala, and will fly home from there in about a week and a half.