The last week or so in Rio Dulce I spent searching for paradise, and I found at least a piece of it. 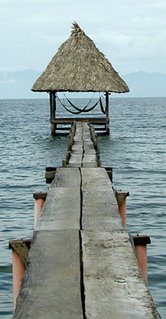 My first destination was an isolated beach on the southern shore of Lake Izabel, about 10 miles from the bridge at Rio Dulce. Twenty-some years ago an ex-pat Canadian named Denny was sailing on the lake with a friend of his and found the beach, the only decent one on the lake. I’m not sure how Denny came to buy the place and build a little resort on it, but he did, and he called it, rather unimaginatively, “Denny’s Beach.”

I was mainly looking for a hammock, and there were plenty of those. But I was also happy to find some peace and quiet after the noise and bustle of Rio Dulce. I thought about spending the rest of the week there, but after a few nights I decided to go back and try another place on my list, called Casa Perico.

Casa Perico was only a one-hammock place, but it scored high in the peace and quiet department. Located a few hundred yards up a shallow tributary of the Rio Dulce, it is a collection of bamboo cabins built on stilts over swampy land in the jungle. At night I was lulled to sleep by the hum of a thousand things, and I slept wonderfully sound.

Early the next morning, long before I was ready to wake up, I learned how the place got it’s name–Casa Perico means “Parrot House.” I was awoken by the screeching of wild parrots. That may sound exotic, but as beautiful as they are, they make a godawful racket. Like children, parrots are better seen and not heard.

I could have spent more time in Rio Dulce, and intend to go back and explore more. But that will have to wait. I crossed the bridge at the crack of dawn on a bus for Guatemala City, and then caught another one for a two day trip down to Nicaragua. I’m meeting Faye at the airport in Managua tomorrow.

We plan to spend a few days in the attractive and comfortable town of Granada, where we’ve been a couple of times before. Then we will go exploring parts of the country we haven’t been to. We may not enjoy every place we go to, but discovery is one of the main reasons to travel. I’m hoping I’ll find a hammock someplace along the way.