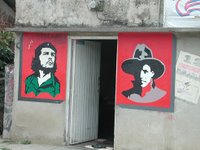 Nicaragua is a country of conflicts and contrasts. Skirmishes and wars going back more than a century, corruption and occasional natural disasters–two devastating earthquakes, in 1931 and 1972, and Hurricaine Mitch in 1992–have made Nicaragua the second poorest country in the Western Hemisphere, after Haiti.

The shadow of the Sandinista revolution in the late 70s and the Contra war that followed still hang over the country, especially with the recent reelection of Sandinista leader Daniel Ortega (just “Daniel” to his supporters). During Ortega’s first term, after the revolution, he proved to be as corruptible as those he fought against. His reelection may indicate the Nicaraguan’s willingness to give him a second chance or, more likely, how bad the other options were in the three-way presidential race.

At a restaurant I fell into a conversation with an economics professor who described himself as a Sandinista and a revolutionary–but he didn’t vote for Daniel. As far as he was concerned the “Danielistas” have betrayed the Sandinista revolution. Daniel has a chance to redeem himself, but it won’t be easy.

From where we are right now, as I write, those conflicts seem remote. We have come to a hot springs, developed Nicaraguan style with thatch-covered patios (with hammocks!)and concrete block bungalows. It feels good to soak away some aches from bus rides and bad beds. The cost for our room and food here is way beyond our budget, but we take comfort in knowing that we are contributing to Nicaragua’s economic recovery.

Faye arrived in Nicaragua just before Valentine’s Day, and we went directly to Granada. Aside from some beach areas on Nicaragua’s Pacific Coast with little more than basic amenities, Granada is virtually the country’s only tourist magnet. I’ve written about Granada before. It has an interesting history, but I won’t go into it again.

We were charmed by Granada the first time we were there in 2003, and to a lesser degree again the next year. This year I think we decided we’ve had enough of it. Maybe it was just the heat that wilted our enthusiasm, or too many tourists. At any rate, after a few days of relative comfort we decided to head up into the cooler mountains to the north, off the beaten path.

Our first stop was the town of Estelí. The valley area around town is mostly agricultural. Fresh cheese and yoghurt from local dairies are widely available. Cigars rivaling Cuban’s, so they claim, are made in Estelí from local tobacco fields. Coffee bushes grow in the mountains nearby, though someone needs to teach these people how to make a decent cup of coffee.

A couple of nights and a day in Estelí was more than enough, but I spent an extra day exploring the town while Faye recovered from some food-related intestinal distress. One interesting, but potentially hazardous, thing about getting away from tourist areas is that we are forced to eat like the locals in restaurants not only unaccustomed to our fickle foreign taste buds, but perhaps also our standards of hygiene. We take our chances (and occasionally our Pepto-Bismol) and everything usually works out fine, but not always.

The good part is that we eat some food we might not otherwise and are sometimes pleasantly surprised. In Estelí I particularly liked tortillas wrapped around local cheese with cream and cabbage. My other discovery was some delicious peanut brittle. I’m hoping we run across that again someplace.

Getting away from tourists is pretty easy to do in Nicaragua, but getting away from crowds is more difficult. We had read about the Miraflor nature reserve in the mountains beyound Estelí and headed up that direction next. The bus out of town left the pavement almost as soon as we started and for the next 50 miles we traveled a dirt road. We were let off at an intersection a mile short of our destination and we walked the remaining distance. As we trudged along I had plenty of time to think about how I could pack lighter next time.

The reserve is a nearly 100-square-mile forest and agricultural area. In 1990 the residents of the several settlements in the area formed a cooperative of sorts, and dedicated their land to sustainable agriculture, and eco-tourism.

We had made reservations at a place we knew little about except its name and approximate location. We were both pretty tired by the time we reached the place, but as we entered a lush garden through a green wooden gate the scent of orange blossoms made me lift my head. Within a few steps were not only orange trees, but banana trees, ginger, papaya, birds-of-paradise and more.

It felt like an Eden, and it was, in more ways than one. There was no running water or electricity (except for a couple hours of lights in the evening from a generator). The accommodations were basic, but comfortable enough. As we were getting settled a beautiful little black and red bird perched close by our room and ate granola out of our hand. In the garden there were several other varieties of birds, from hummingbirds to a large green parrot.

We spent a day walking down dirt roads in the area, past cattle pastures and little settlements. We saw a few vehicles; most people rode horseback. I don’t think there was electricity anywhere, except from generators. The area felt like it was in an undeveloped state preserved from decades ago.

We stayed just a couple nights, and decided to move on. As we left one of the red and black birds landed on my shoulder and began pecking my ear. I don’t know what St. Francis would have done, but I had to put a stop to it.

Even as we trudged the mile back to where we could catch a bus, we were glad we had come. We felt like we had discovered something. I don’t know if the eco-tourism thing will ever catch on, but maybe it better like it is now.

We spent much of the day on an old school bus, bumping along another dirt road, the kind that fills your nose with dust and makes your insides ache. We were taking the back road to Jinotega. It wasn’t exactly the road from hell–there are worse. But it was at least the road from heck and we were glad when we finally got back to pavement.

We spent a couple nights in Jinotega, and then one in Matagalpa. Both towns were hot spots during the Contra War, but there is little worth seeing. About the only good thing we could say about them is that there were few, if any, other travelers. But sometimes even the charm of being the only gringos in town isn’t enough.

We’ve had just about enough of the off-the-beaten-path thing for this trip. There are a couple out-of the way places that sound somewhat interesting–the Corn Islands off the Caribbean Coast, and the San Juan River, which divides Nicaragua and Costa Rica. But it takes quite a bit of effort to get there, unless you fly. From what we’ve heard it doesn’t sound worth the effort.

Faye has two weeks left and we will spend at least part of it on a beach somewhere. I’m sure there will be other gringos. I just hope there are enough hammocks to go around.