We traveled from Lanquin to Rio Dulce in two legs, the first in a tourist shuttle, the kind that I often disparage. It was convenient and comfortable, and I liked it. There were only five of us in a vehicle big enough for 20 or more, so we spread out and admired the spectacular scenery from soft seats, through oversized windows. I know my budget will keep me from sliding down the slippery slope of luxury travel, but that one little stretch was nice.

The next leg made up for the luxury of the first. We were deposited at a major intersection, where the road down from the north meets the main road coming from the Atlantic port of Puerto Barrios. We waited for an hour or so for a bus that would take us on to Rio Dulce. The one we finally got had seen better days, and almost immediately we wondered whether it would even make it to our destination. As we drove, under the floor there was a very loud vibration.

It sounded to me like the drive shaft was hitting the undercarriage. At one point the driver got under the bus and pounded on something. That seemed to help for a couple hundred yards or so, then the noise and vibration returned as bad as ever. I tried to ignore the noise and pretend that my seat was a vibrating lounge chair. But I was afraid the drive shaft would come up through the floor and take off my legs, so I was unable to fully relax.

By the time we reached Rio Dulce we were more than ready to kick back on a riverside deck with a cold drink. I knew just the place. We went to a hostel where, for $2.50 a night, we got beds in a communal room on the second floor above a communal unisex bathroom. (Travel does, indeed, broaden one’s horizons.) But the main thing was the deck by the river. With drinks in our hands we watched the river traffic and thought about how grand life is. 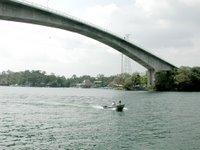 Rio Dulce is the intersection of a road running north and south, and a river running east and west. A bustling and rather seedy settlement has grown up around the north end of the very long bridge. There are numerous docks, restaurants, bars and boat-related businesses catering to the yachters who sail up the 25 miles from the Caribbean. Some are just visiting, on part of a longer trip. But many more live here at least for part of the year.

The boat people are quite different from the travelers one meets in other parts of the country. I suspect the boat people in Rio Dulce, particularly the regulars, are different from those in more upscale destinations, too. Like the port, many seem a bit seedy themselves. There are some real characters, and it doesn’t take much to start a stream of stories. (Getting them stopped, however, can be a challenge.)

Most of the activity around Rio Dulce is related to boats and the river, but about an hour away by bus along a dirt road is a marvel I had heard of, but had never been to–a hot waterfall. Anna Colleen and I decided to check it out. 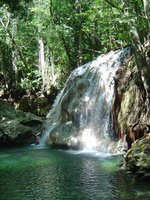 The waterfall turned out to be one of the most amazing things I’ve ever experienced in Guatemala. Hot water cascades down an embankment of rocks, thick with mineral deposits, into a pool of cool water. It was the mother of all hot showers. As we bumped along on the way to the waterfall I said to Anna Colleen that I hoped the ride was worth it. As I stood under the waterfall, the hot water pounding on my back I thought to myself that it may be worth the price of a plane ticket. It was that good.

We spent just a night there, then took the boat back up the river the next day, back to Rio Dulce. Overnight is usually enough in Livingston; the best part is the trip on the river.

Anna Colleen left today to go back over to the highlands. She is meeting a friend of hers who will be coming to Guatemala for the first time. With her experience of the past couple of weeks she is almost a veteran traveler here and will, I’m sure, be a good guide for her friend.

I intend to spend the next few days on a remote beach a few miles from Rio Dulce, along the southern shore of Lake Izabel. I have a new book and the place I will stay has hammocks. Sounds perfect.