Due to circumstances beyond my control, as so much here is, I did not meet Anna Colleen at the bus station in Guatemala City. I arrived a good two hours later than I planned to, and when I got there she was nowhere to be found. I could only imagine what had gone through her mind as she presumably waited for me, alone in a strange city.

Fortunately, there was a hotel next door to the bus station that had internet access, and, resourceful person that she is, she had the presence of mind to send me an email with her plan, which was to go on to Coban without me and hope I caught up. I am proud to say that I had the presence of mind to think she might do that, so I checked my email–probably on the same machine that she had written her message–and sent her a short note to let her know I got it.

As it turned out, she had left the station only minutes before I finally got there. I caught the next bus to Coban, and when I arrived I got a room at the motel she told me she was going to. She found me a few minutes later (relaxing in a hammock) after she had returned from checking her her email. Gotta love the internet. I don’t know about Anna Colleen but I felt rather proud of our travel savvy.

There is little reason to spend much time in Coban, so the next day we continued on northwards to the small town of Lanquin. As far as scenery goes, the area north of Coban and around Lanquin is the prettiest I’ve seen anywhere in Guatemala. Roads wind through rugged mountains, which are softened by lush vegetation. The climate is sub-tropical, and evergreen and deciduous trees grow side by side with palm and banana trees.

The pavement ends miles before Lanquin, which gives the impression that it is much further off the beaten path than it really is. Sometimes from the road we could see clusters of small houses in distant valleys and I wondered about the lives of the people who lived there. 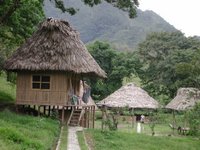 The place we stayed, El Retiro, is described in the guidebook as “sublimely located.” That is certainly true. It is sort of an eco-village, a collection of thatched huts and a large restaurant/hangout bungalow situated at the edge of the Cahabón river. On the far side of the river goats graze on the steep hillside. We ate the evening meal, served family style on long tables, among travelers of many different countries. It is always interesting not only to hear tales of where other travelers have been, but to learn about their home countries as well. 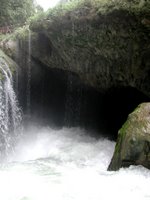 The main reason most people come to Lanquin is to visit the pools of Semuc Champey. About ten miles above El Retiro, up a bumpy dirt road, the Cahabón river flows through a large canyon. At one point the river cascades violently into a narrow gorge and disappears underground, only to emerge fifty yards later in a series of serene pools. The scenery is spectacular, but the contrast makes it even more so. 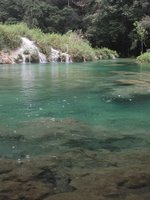 Another attraction in the area is a bat cave. The afternoon we got to Lanquin we joined a small group to scramble around inside the cave, then waited for the bats to exit en masse at sunset. Mineral water has seeped into the caves for thousands of years, forming stalactites and stalagmites. We were cautioned to try not to touch them, but it was clear that our safety was of secondary concern to the preservation of the formations. We slipped and slid through the dripping cave, clutching our flashlights in one hand and trying to steady ourselves with the other. We saw only a few bats (and a few really big spiders)inside the cave, but once they started streaming out we realized how many must have been hiding in the nooks and crannies of the cave.

As idyllic as Lanquin and El Retiro was, we wanted to get to the tropical river fronter settlement of Rio Dulce before Anna Colleen had to go back over to the highlands. We plan a trip down the river to Livingston and back up the next day. Rio Dulce will be our last stop together. She has been a great travel companion.