The past week or so has been a little of this and that, with not too much worth writing about. Clark and Anna Colleen arrived safely last Friday and bussed it up to Xela first thing to meet my little family. It was a five-hour ride and I thought they would be exhausted since they had left home the evening before and flown all night. But if they were, they didn’t show it. Rolando and Winston wanted to come to the bus station with me to help with their luggage, they said. But I think the boys were just eager to meet them.

The two boys were taken with Anna Colleen for obvious reasons, but the next day Angelina, Yessica and Sarita seemed to be equally impressed, especially with her blond hair and blue eyes. Fortunately Anna Colleen’s Spanish is pretty good, so they could communicate without too much trouble. All the kids seemed to really enjoy showing around both of them in the short time they had there.

A couple days later I met the two of them again in Panajachel. They had just been to the famous market at Chichicastenango, and had the next day scheduled to spend around the lake. 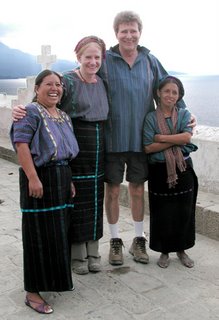 For short timers one of the best ways to get at least a feel for some of the villages around the lake is a boat tour that visits three Mayan towns, with a little time to look around in each of them. The last stop on the tour is San Antonio (where Faye and I met almost 11 years ago, and where we spent a little too long trying to live like the locals on return visits.) I still have friends there, and I met Clark and Anna Colleen when the boat arrived and introduced them to some of the villagers I know. Petrona and Maria, aunts of my godchildren had a good time dressing the two of them up in semi-traditional San Antonio outfits. I’m not sure they enjoyed it as much as the aunts did.

The dynamic duo left at the crack of dawn the next day to hike a volcano one day and tour Antigua the next. Then they flew to the northern jungle to visit the Mayan ruins of Tikal and do some sort of jungle canopy tour. Clark will need another vacation when he gets back home tomorrow afternoon.

Anna Colleen and I are planning on meeting at a bus station in Guatemala City tomorrow morning. From there we will go to Coban and, if we get there early enough, on to Lanquin near the sublime travertine pools of Semuc Champey. I’m really looking forward to hanging out there for a day or two. Then on to the tropical area around Lake Izabel and Rio Dulce. I’ve wanted to spend some time there for several years. Someplace with a hammock would be nice.

That’s the plan anyway. It is good to have a plan, but not get too attached to it.

Yesterday morning I came down from Panajachel to Antigua. I felt more than ready to leave Pana, but I’m glad I’m not spending much time in Antigua. It is crawling with tourists and crowded with upscale shops and restaurants. That’s fine, but it’s not what I come to Guatemala for. I really have to wonder what a lot of these tourists come to Guatemala for. When they venture away from Antigua they travel around the country in shuttles, shoulder to shoulder with their fellow tourists, their Samsonite luggage stacked in the roof rack.

Of course, I shouldn’t complain. I should just get on a chicken bus and head for the boonies. As long as there is a decent internet connection, I’ll be happy.