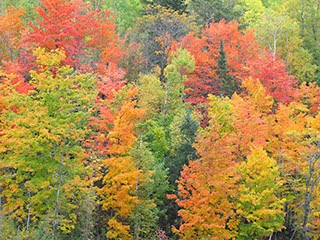 After spending two tranquil weeks in relative splendor at Faye’s brother’s lakeside “cottage” we are continuing our journey, across eastern Ontario and Quebec. As before, we’ve avoided the urban areas as much as possible and have tried to stay on rural roads (not too hard to do in Canada). The flamboyance of fall has engulfed the countryside. The scenery has been spectacular.

It is hard to say which part of the trip we’ve enjoyed more; every place has had its charms. The rugged mountains and forests of B.C. are impressive. The open prairies felt fertile and peaceful. Ontario is full of charm and history, from small towns with houses built of limestone and brick to the magnificent nation’s capitol of Ottawa.

But Quebec is special. It seems like the kind of place we could easily spend weeks, or more. One town in particular had us both thinking we should pick up and move there, at least long enough to learn French. (Various places on this trip I have said “I could live here.” And Faye says “Remember, they have real winter here!” )

Speaking of French, it was a bit of an eye opener for me to realize that Quebec really is a French-speaking province. Spoken English was rare enough that when we heard anyone speaking it, we poked each other and raised our eyebrows. Written English was nearly non-existent. It took a while to get used to the fact that I couldn’t read anything.

For me, as an American, Canada is a foreign country, of course. But it doesn’t feel foreign, just a little different. Quebec, on the other hand, really did feel foreign. Mainly because of the language, of course. But with language comes culture, and it seemed to have a certain panache. Even mundane interactions felt a little exotic.

Quebec has been agitating for sovereignty for the last 60 years. The issue is the open sore of Canadian politics. Bringing up the subject is the surest way to get Canadians to argue about something. There are compelling views both for and against Quebec becoming it’s own country, but being there it wasn’t hard to think it already was. It certainly has one foot out the door. On the other hand, it probably never had more than one foot in the door to begin with. It has a complicated history.

I think the high point of our eastward trip through Quebec was something that would have seemed exotic in any language. We dropped into a Benedictine abbey located in the forest outside a little town for the mid-day Mass. The monks sang Gregorian chants in 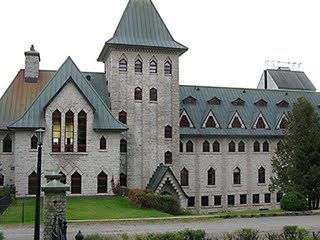 Latin, and other parts of the service in French. Since both languages are equally unintelligible to me, it was a very enjoyable musical experience, without any theological quibbles I might have had with the meaning of the words.

The monks support the abbey by making a wide variety of very good cheese. We bought a couple of small packages for our lunches, but we may have to go back for more on our trip westward.

We have moved on to the beautiful maritime provinces of New Brunswick and Nova Scotia, but I will save that for the next post.