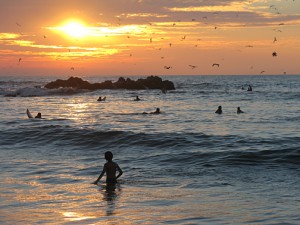 Sun, sand, sea breezes–this part of our trip is easier to explain to those who ask, “What do you do down there anyway?” For the past week or so I’ve done little else but hang in a hammock and read a book, with the occasional walk on the beach and nightly sunset supervision.

A couple weeks, ago as we were spending another night in the chilly highlands of Guatemala, we decided we needed to go someplace to warm up and relax. The beaches of Guatemala are nothing to brag about, so we decided to make the trek up the coast of Mexico to Puerto Escondido.

The last time either of us had been in Puerto Escondido was more than 15 years ago, before we had met. Back then it was a pretty low-key place, mostly a surfers’ hangout. There would be an overnight bus ride involved, but we thought it would be worth it. A few hours into our trip we weren’t quite so sure.

For some reason my three oldest godchildren, Angelina Winston and Yessica decided to accompany us to Tapachula, the Mexican city where we would catch the northbound overnight bus. I’m not sure whether they just wanted an outing, or thought we needed the help. But it was fun to have them along. And, it turned out, we did need the help.

As we approached the Guatemala/Mexico border we dropped from the cool highlands to the hot coastal lowlands in less than an hour. Faye was feeling that she was already warmer than she had bargained for. At the border the kids crossed on their own, saying they would wait for us on the other side.

The border formalities went pretty smoothly, but on the Mexican side, just as the Mexican official cleared us and said “”Welcome to Mexico,” Faye overheated and almost passed out, among other unpleasant symptoms. Fortunately there was a decent washroom nearby, so it could have been worse.

We eventually caught up with the kids, who were a big help trying to get Faye feeling better and carrying her luggage. We had expected to catch the bus up the coast later that night, and the kids would bus it back to Guatemala. But instead we got a couple rooms for all of us at a hotel in Tapachula.

On the square in Tapachula.

Though Faye didn’t enjoy the evening much (she stayed in the room and rested), the kids and I did. We strolled around Tapachula’s central square where, among other wonders we could sample tequilla-flavored ice cream. (Angelina ordered a couple scoops of it, and we all promised not to tell her mother.)

The next day we left the kids at the hotel, and we caught a taxi to the bus terminal…where we learned that night’s bus was full. So we bought tickets for the next night, and got another hotel room. After all that, the extra day in a hotel, 11 hours in the bus terminal waiting room the following day, and a 12-hour bus ride, we finally made it to the beach…and we’ve done little since.

The view from the beach.

Puerto Escondido has changed in the last 15 years. It still has a surfer vibe, but there has been quite a bit of development, as well as some decay. None-the-less, it is a fine place to hang out and enjoy life for a while. It feel like a vacation from our trip.

Besides its rather nice beaches, this area of Mexico is known for production of tequilla and mezcal, made from different parts of the same plant, the agave cactus. There are many famous and well-respected distillers.

And then there is the cottage industry–small makers of hooch of varying quality, from literally lethal to quite good. Sometimes guys wander around selling rotgut mezcal out of 5-gallon gas cans–for about the same price, and taste, as gasoline.

There is an American expat here who makes flavored mezcals which fall into the latter category. We were able to buy a bottle of his coffee-flavored stuff. (I know to some that probably sounds like a breakfast drink. But I think it would be a mistake to get started too early in the day.)

Our plan is to spend another week or so here, then hit the road, first over to San Cristobal de las Casas, a charming town in the mountains of southern Mexico, which is another place we haven’t been to in quite a while. Then back to Guatemala.