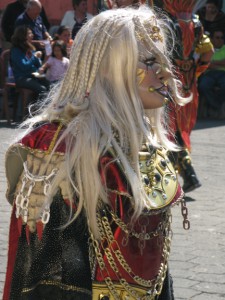 Virtually every event in Guatemala is celebrated with fireworks–mostly noise makers. And Christmas is the biggest celebration of the year. Whatever Christmas bells there may have been were drowned out, but our ears are still ringing.

We left the lake a week or so ago to spend Christmas with the family of my godchildren in the highland city of Quetzaltenango. Though it is Guatemala’s second largest city, it feels relatively sane and safe…except at Christmas. 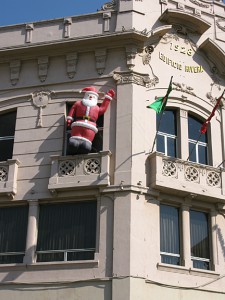 In the days leading up to Christmas we had roamed the streets of the city, past gaudy decorations, sparkly christmas trees, inflated reindeer, and sidewalk Santas shouting “Ho Ho Ho, Feliz Navidad!” In the central park was a giant snowman (sort of) probably created by people who had never seen snow. Central American Christmas is mostly a transplanted version of North American Christmas, and it feels a little surreal.

The day before Christmas was a frenzy of activity as people shopped and prepared for the evening ahead. The markets here are spectacular anytime, but more so around the holidays. Vendors overflow the market onto the sidewalks with large baskets of beautiful fruit, veggies, bread and all kinds of other goodies. The markets here make the produce sections of grocery stores at home look quite anemic.

The family of my godchildren live several blocks from where we stay, and late evening on Christmas Eve the three girls, Sarita, Yessica and Angelina came to walk us to their house. We dodged fireworks and people full of Christmas cheer (or whatever their beverage of choice).

It is a Mayan tradition to make tamales on special occasions. We don’t get them often, but they are delicious. They are made of corn flour, usually filled with chicken or some other meat. But to accommodate me the family made vegetarian tamales, filled with chilies, carrots, potatoes and other goodies. I don’t know if everyone else thought they were better than usual, but I did! 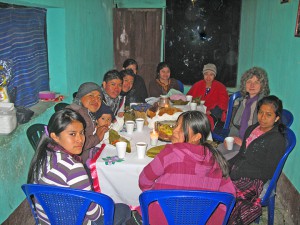 Tamales and hot chocolate with the family

As the kids have gotten older–they are between 13 and 22 years old now–it has become harder to get together with the whole family. But aside from their father, who is still working as a laborer in the US, everyone was there, including a new baby just a week old. It was a real treat for us to be able to spend Christmas with them, and an honor to be considered part of the family.

We finished up just before midnight, the hour when the pyrotechnics reach a crescendo. I went out into the ally with the boys to light off a 20-foot string of firecrackers (if you can’t beat ’em, join ’em!) while Faye huddled inside with the girls, no doubt casting aspersions on our maturity.

Across the city the explosions continued for most of an hour. The boys walked us back to our lodgings, past people with better arsenals than we had. Rockets flew past us, and firecrackers exploded all around us. Personal safety did not seem to be much of a concern and we did our best not to appear cowardly.

The next morning, Christmas Day, the city was blissfully peaceful. Late morning we wondered downtown looking for someplace open to have breakfast. Nearly everything was closed, and the streets nearly empty. It seemed the whole city had taken the morning off.

At noon the city came alive again with another round of explosions. It was hard to imagine anybody had anything left over, but there was enough to at least partially relive the excitement of twelve hours before.

In the afternoon the girls came over and we watched a troupe of elaborately costumed dancers performing in a street nearby. The dancing was somewhat lethargic, but the costumes were amazing. We were told each one cost about $3000, which is a fair amount of money in this part of the world. In traditional folkloric dances most of the costumes depict Spanish Conquistadores. I don’t know what these costumes were supposed to represent, but they were very cool.

We haven’t quite figured out where we’ll be going next, but it will be someplace warmer. The temperatures here in the Guatemalan highlands have been decidedly Christmasy.