We arrived in Hanoi on New Year’s Eve, the end of January. Alert readers will be asking, “Isn’t that your third New Year’s in the past month?” Why yes, yes it is. 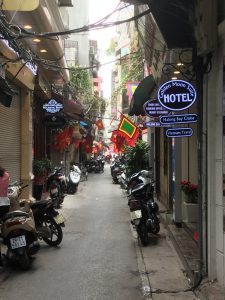 The Vietnamese New Year, called Tet, makes all other New Year’s celebrations look like just a lame excuse to get drunk, with a day off to recover. Tet is celebrated for several days on either side of the actual day, which is based on the Vietnamese lunar calendar. It is a time of new beginnings, with much ceremonial solicitation of good luck in the coming year. Such rituals seem a sign of optimism to me.

There is a pretty little lake in the middle of Hanoi, ringed by trees and flower beds. On New Year’s Day families and young couples dressed in fancy new clothes, as is the tradition, posed for photos at scenic spots all around the lake. As a first introduction not only to Hanoi, but to Vietnam and its people, nothing could have been better.

Hanoi was not what I expected. Last I heard the US was sending B-52s to bomb it. But you wouldn’t know it today. A thriving modern city has grown up around a historic centre. It has a population of 8 million (and 4.7 million motorbikes). Even during Tet, when most businesses were closed and many residents had left the city to spend time with their families in the country, sidewalks in front of countless little coffee shops and restaurants were crowded with people sitting at little tables on low stools. 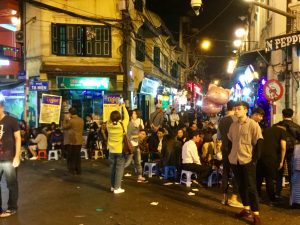 Street party in Hanoi during Tet.

Statistically Vietnam’s demographics are similar to other Southeast Asian countries–almost half of its population is under 30. But in Hanoi it seemed like there were a disproportionate number of young people, many in fashionable outfits, which gave the city a progressive feel–an interesting contrast against the historic backdrop.

From Hanoi we visited a couple of “must see” places to the north, then headed south to check off a few more places on the same list. None of them were as enchanting as Hanoi. Here are my brief travel notes:

Sapa- surrounded by terraced hillsides and filled with tourists.

Hoi An- an 18th-century Indochinese theme park with small streets crowded with tourists, clumps of them following their tour guides like bewildered ducklings.

Da Lat-a moderately attractive small city in the mountains north of Ho Chi Minh City. It is a little harder to get to, so it has a more reasonable concentration of tourists. It is surrounded by more greenhouses than I’ve ever seen in one place–growing flowers and strawberries–and vast mountainsides of coffee plants. Vietnam is the second largest exporter of (mostly mediocre) coffee, after Brazil.

I’m not doing these places justice, of course. They are “must sees” for a reason. But the hoards of vacationing tourists just get to me after a while. I had to restrain myself from seizing selfie sticks and beating their owners senseless. 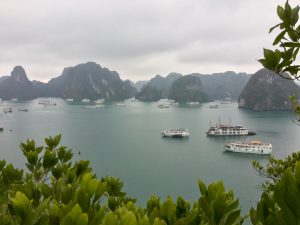 For the past 20 years or so, Vietnam has enthusiastically embraced tourism. It has done a remarkable job creating the infrastructure and services for handling the millions of visitors that come every year. (More than 10 million last year). At any hotel you can choose from a menu of tours, destinations and modes of transportation.

It is ridiculously easy to get from place to place, in any degree of comfort you can afford. But following the path of least resistance means sharing the exact same experience with hundreds, if not thousands of fellow tourists. Getting off the beaten path to the kinds of places we find more interesting would take more work than we put into it this time. But now that we have moved the “must sees” into the “been there, done that” column we can do a better job planning an itinerary for our next visit.