For American males of my generation-a lot of us anyway-when we hear the word “Vietnam” what we think of first is the war that took place in that country, rather than the country itself. The geographical names we learned were those connected with events: the “Gulf of Tonkin incident”, “the mining of Haiphong Harbor”, “the My Lai Massacre”….

The war years were formative for me, and to a large degree, American culture. Fault lines cracked open between old and young, those who went to war and those who didn’t, the establishment and rebels, between what we now easily identify as conservatives and liberals.

At the time it seemed like everyone was either for the war or against it. I was against it, even in my early teens. I was the 16-year-old farm boy wearing the “Peace Now” button, while a lot of my neighbours had “America-Love it or Leave it” bumper stickers on their pickup trucks.

I didn’t fight in Vietnam–I fought to stay out of a war I didn’t believe in. But the war was a part of my life, nonetheless. For years footage from the front lines was featured on the nightly news hour (before cable news, remember.) It was something many American families consumed with their dinner. Eventually anti-war protests across the US, and around the world, were also covered.

For myself, and a lot of other Americans I’m sure, Vietnam, the war, has remained a partially unhealed wound, like a bone that broke badly and mended poorly. This trip to Vietnam, the country, was an exorcism of sorts. It was an opportunity to overwrite what was essentially a symbol for me with impressions of a real place, with real people.

Today there is remarkably little evidence of the war in Vietnam, either physically, or in the attitudes of the people. The physical scars have mostly been erased–intentionally or by time–and people seem much more intent on looking forward rather than back. One man we spoke with, who was 12 years old when the war ended and had seen people blown open said, “Back then, us and the Americans were enemies. Now we are friends,” and made a gesture indicating not just friends, but close friends. 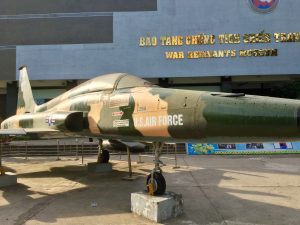 However a visit to Saigon’s War Remnants Museum is a sobering reminder that even if they may forgive, those who lived through the war can never forget. Neither can the second- and third-generation victims of the defoliant, Agent Orange, who live with birth defects, or those who, to this day, stumble across unexploded bombs dropped during the war.

The young seem to have little idea of or interest in the war. I chatted with a 20-something student in Hanoi. He wanted to practice his rudimentary English, and we covered the usual “Where are you from?” “How do you like Vietnam?” type questions. I took the opportunity to ask him what he knew about the war. He seemed a little bewildered by the question. I asked, “Are you taught anything about it?” He finally said simply, “America tried to conquer us, but it could not prevail.”

It is reassuring to see that communist Vietnam is doing reasonably well and that its people are warm and welcoming to everyone, even Americans. It has its problems, similar to most countries in this region, but if this is what 60,000 American soldiers died fighting to prevent (along with probably 20 times more Vietnamese on both sides), it was a tragic waste of life indeed.

I think the effects of losing the war in Vietnam are still being felt in the US; there are those who remember the sting of defeat. A lot of people want to “make America great again” and get back to a time when we were “winners.” They want a do-over, if not in Vietnam, then some other foreign country. And if they can find some foreigners closer to home to kick around, that will do in the meantime.

I wonder how many of those people have ever traveled to another country. I’m not saying you come back feeling warm and fuzzy about everyone you meet (I have a short list of tourists from certain countries I’d rather not be around) but something you learn is people everywhere are pretty decent, trying to get by like everyone else.

I can’t say I’ve come to understand Vietnam or its people in the month we’ve been here. But at least now it is something apart from the war that took place here…the war that in Vietnam is known as “the American War.”

We arrived in Hanoi on New Year’s Eve, the end of January. Alert readers will be asking, “Isn’t that your third New Year’s in the past month?” Why yes, yes it is. The Vietnamese New Year, called Tet, makes all other New Year’s celebrations look like just a lame excuse to get drunk, with a day off to recover. Tet is celebrated for several days on either side of the actual day, which is based on the Vietnamese lunar calendar. It is a time of new beginnings, with much ceremonial solicitation of good luck in the coming year. Such rituals … END_OF_DOCUMENT_TOKEN_TO_BE_REPLACED