To those unfamiliar with Guatemala it is difficult to convey what the country is like. There are the iconic weekly markets held in every village of any size that are a feast for the senses. And the psychedelic painted buses chicken buses that haul people, products and yes, poultry to and from nearly every place in the country, especially on market days.

There are villages, towns and cities constructed almost entirely of concrete block, with buildings often left crudely unfinished, by our standards anyway, or painted in bright, unattractive colors. Advertising and political logos seem to be a pervasive design motif.

Patchwork cornfields cover mountainsides and nearly every bit of level ground in rural countrysides. Depending on the season the fields will be thick with growing cornstalks, or barren with men cultivating the ground with heavy hoes, no doubt in much the same way as 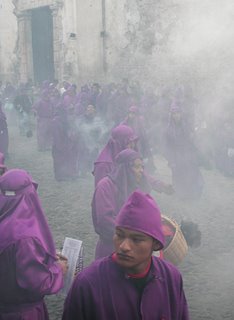 they have for centuries.

The biggest event of the year—Semana Santa, or Holy Week—is next week, culminating in Easter Sunday. In many towns around the country, most notably Antigua, there are already colorful religious processions. Not being Catholic myself I am not quite sure what most of the processions are supposed to represent, but they are quite a spectacle. I suspect they are also a health hazard; sometimes the smoke from burning copal incense nearly obscures the view of the procession.

It’s all good, but sometimes one yearns for something different. Last weekend was the third annual music festival in Santiago Atitlan, on the far side of the lake from Panajachel, where I spend most of my time. The festival was nominally a benefit for a local hospital that was damaged by Hurricane Stan, but it was also just a good excuse for a party. Nearly 20 groups, from a couple of indigenous Mayan bands, to bluegrass, hip-hop, rock and several flavors of jazz, played for more than 12 hours. It reminded me of some of the music festivals from back home. The caliber of musicians around here, both Guatemalans and expats, is a lot better than one might expect to find in a third-world country. I was very impressed and surprised.

An even bigger surprise was when British rocker Brian Howe, formerly of Bad Company, 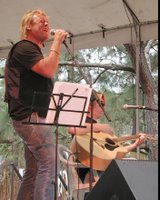 showed up with his guitarist. Everybody was just shaking their heads trying to figure out how he had dropped in on the festival. He was funny and it seemed he also was wondering what he was doing there. I ran into him on the street the next day and talked to him a little. He said he liked it around Lake Atitlan and was looking at buying a house.

The festival lasted until midnight. The boats were no longer running back to Panajachel where my hotel room was, so I spent the rest of the night huddled around a campfire with a dozen others who also had not thoroughly thought through the situation beforehand. I hadn’t pulled an all-nighter since my youth. Doing it this time did not make me feel any younger.

The upcoming Semana Santa festivities in Panajachel probably won’t be making me feel any younger either. Where Antigua is known for its traditional religious processions during the week, Pana is known for its drunken revelers, mostly young people up from Guatemala City. I probably would go somewhere else for the week just to avoid the scene, but on Good Friday I want to go out to the nearby village of San Antonio Palopó where the celebrations are quite traditional, colorful and a lot more low key than Antigua. If I give up my room in Pana it is not likely there will be a vacancy anywhere in town during Semana Santa. There will probably be plenty of people sleeping in the streets, but I’ve had enough of that for now.