We left Canada the afternoon of the last day of 2014 and landed in Mumbai, India, on the second day of the new year, having fast-forwarded through New Years Day on eastward flights. We’re at the beginning of a two-and-a-half-month trip which will take us through much of India, but by no means all of it. India is a vast and diverse country and we have no hope of doing more than scratching the surface.

We had the good fortune of meeting an Indian couple just days before we left home, which resulted in us being met at the Mumbai airport in the pre-dawn hours by a relative. He took us to his home and gave us a bed where we got a little much-needed sleep. Later in the morning, after breakfast and some interesting conversation with him and his wife, they took us to our hotel in another part of the city. It was the best of beginnings.

Mumbai is called “Maximum City” for good reason. With a population of close to 20 million people, it is the largest in India. It is crowded and chaotic and gritty and pulsing with life. There are the crazy rich and the chronically poor. In some areas rents and real estate values rival New York. Not far away a million people are packed into a square-mile area of one of the world’s largest slums. 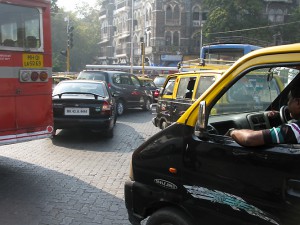 Then there is the traffic. Imagine streets and roads solid with vehicles, traveling not in orderly lanes, but weaving in and out, every car and motorcycle looking for an opening in the desired direction of travel. It is amazing anyone gets anywhere, but they do, eventually. Mumbai drivers are truly amazing. I have yet to see any collisions or even scrapes. Horns honk constantly, and I’ve concluded that somehow the sound of the horn magically creates an opening the exact size needed to squeeze through. We’ve taken a few taxis, and the experience takes some getting used to. A mantra I use to relieve the stress is “This isn’t my car, this isn’t my car…” 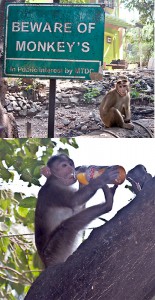 A monkey drinks a bottle of juice stolen from Faye.

Mumbai isn’t much of a tourist destination, but there are a few things worth seeing. In addition to the slum (there are guided tours), there’s the

landmark Taj Mahal Palace Hotel, the site of a three-day terrorist attack in 2008. We saw the world’s largest outdoor laundry, where hundreds of workers hand wash laundry from Mumbai’s hotels and hospitals. There is also quite a bit of impressive colonial-era architecture, mostly government and administrative buildings.

About an hour’s boat ride into the Mumbai harbor tourists and Indians alike flock to a small island to see caves and Hindu figures that were carved out of solid rock, probably in the 5th or 6th century A.D. On the path leading to the caves Faye was pondering the meaning of a sign that said “Beware of Monkey’s” when a monkey helped her understand by stealing a bottle of juice she had just bought.

I’m sure there is a lot more to Mumbai than we’ve seen, but we feel like we’ve seen enough and are ready to get out of the city. Tomorrow at the crack of dawn we’ll be taking our first ride on the famous India railway.