Today is my last day in Guatemala; tomorrow I fly back to the States, and expect to be home a few days later.

I can tell it is time for me to leave because there are things annoying me that probably shouldn’t. The latest example is the color of the room I am staying in tonight. The bottom half of the walls is a particularly unpleasant shade of green, with some blue in it but not enough to be teal. The top half of three walls is baby blue, and the top half of the fourth is sunshine yellow. The ceiling is white but so textured it looks like a cottage cheese factory exploded. I guess I shouldn’t expect too much for $4.50.

On the plus side, a few feet outside my door there is an aviary with a dozen or so birds, including mourning doves. (That is a plus for me, of course, not the birds.) The cooing of even caged mourning doves is quite pleasant. I may change my mind if they keep it up all night.

The past week has been if not always enjoyable, at least interesting. The week before Easter, 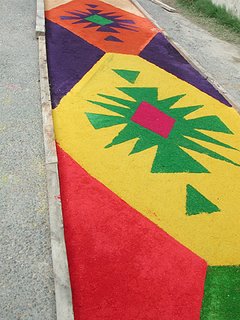 Semana Santa, is celebrated in many places in Guatemala with religious pageantry and the famous alfombras, carpets made of colored sawdust, and sometimes flower petals, covering streets. They are mostly of a religious theme, but some are in geometric patterns.

Somewhat like Tibetan sand paintings, the alfombras are colorful, intricate and time consuming to make—and don’t last long. They are constructed early in the day, and later the same day a procession tramps through it.

I believe the point of the Tibetan creations is to illustrate the transitory nature of life. I suspect the alfombras are meant to convey the message that no matter how hard you work, it’s going to look like crap before long.

I spent most of Semana Santa in Panajachel, on the shore of Lake Atitlan. Pana is a year-round vacation destination for 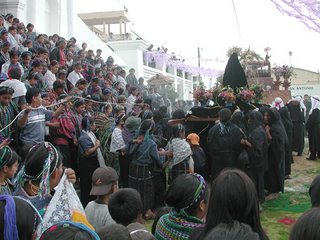 foreigners, and during holidays, Guatemalans. Though there was some religious pageantry, it competed with a decidedly secular atmosphere that was quite a bit like Spring Break on San Padre Island. Massive quantities of alcohol were served from ad hoc street stands to hoards of drunken Guatemalan adolescents (a state that persists well into middle age among a certain class).

On Good Friday I left Pana and spent most of the day in the village of San Antonio Palopó, on the lake a few miles away from Pana. I have friends there from the several months Faye and I stayed in the village over the course of a few years. Of the towns around the lake San Antonio is probably the most unaffected by tourism. It does a very good job with its alfombras and procession, and I was nearly the only foreigner there to see it.

I spent the weekend in Xela, Guatemala’s second largest city, where my godchildren live. The city was nearly a ghost town. Evidently anyone who could get out of town to the beach or somewhere had left. After the chaos of Pana it was a real relief.

On Easter Sunday I went with Alva, an aunt of my godchildren, and her two young boys and lump of a husband to a thermal water recreational facility. For years she has talked about taking me there. So, of course she finally gets around to actually doing it on Easter Sunday. Bad idea. We drove for more than an hour out of the city, then another half hour on a dirt road and finally came to the place, which was packed with hundreds of Guatemalans. I was the only gringo there. I felt very tall and white.

There was one fairly conventional swimming pool, packed with mostly adolescent boys, and several smaller pools about 12 feet square. One was being used for baptisms, but the others were pretty much just big bathtubs. Guatemalans bathe half clothed (or half naked, I guess you could say, depending on whether you were a pessimist or an optimist). Whole families were crowded into the pools with soap and loofahs, scrubbing their naked top halves and groping around in their clothed bottom halves.

I’m sure it would have been a priceless cross-cultural experience, but I decided I didn’t really want to join the crowd of bathers. Alva and family didn’t either. As we left she noted that when it wasn’t a holiday the pools were very nice. Too bad she didn’t think of that sooner.

So, that’s it for this trip. Back to reality—or what passes for reality in my life.