Comfort corrupts the righteous traveler. In measured doses it can be a good thing, but after too much pretty soon it all starts seeming normal. You become accustomed to a new standard, which makes it difficult to return to the kind of travel that takes you interesting places, places where there is the possibility of the unexpected. And all of the best experiences are unexpected. 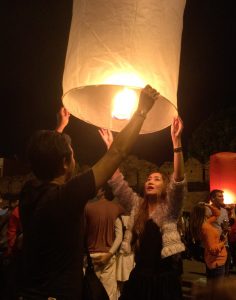 A young couple in Chiang Mai prepare to release a lantern into the sky on New Year’s Eve.

Chiang Mai is well known among travellers and expats as a comfortable place to hole up for a while. Good accommodations, scores of restaurants with some of the best food on the planet, and enough exotic culture to let you pretend you are not hanging around just because it is easier to stay than to move on.

By the time we left Chiang Mai we had been there three weeks. We had a good excuse, as my dentist and crew took time off for a year-end holiday. It gave us plenty of time to do what we’re best at–hanging out, eating, drinking and wandering around. But we were ready to leave the comforts of Chiang Mai and start exploring some less-developed territory. With my dental work finally done and our Thai visas about to expire, we headed for Lao.

We crossed the Mekong River, which divides northern Thailand and Lao, over the Friendship Bridge, built in 2013. The new bridge and official buildings are pretty spiffy compared to the old boats that carried people across the river and scruffy border facilities we encountered last time we crossed there. The bridge is an important commercial link between northern Lao and Thailand, but the old crossing felt more adventurous. 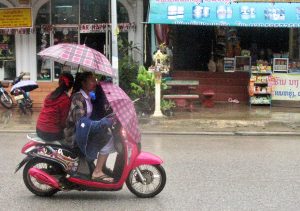 Our plans are a little vague at this point, but we have a couple of weeks to explore northern Lao, the mountainous area nestled between the borders of Myanmar and China. The area has a colourful history of opium smuggling, and is populated by numerous hill tribes. We’re not sure what to expect, but from here on things will likely be less comfortable and more interesting.

The middle of May we moved out of the beautiful lake-view place in British Columbia we had rented for the past five years. The middle of June we sold our house in Oregon. We are well and truly homeless…or at least houseless. We feel blissfully footloose. We spent the past couple of weekends at festivals–the first one, the Oregon Country Fair, near Eugene, Oregon. For the three days of the fair it must be one of the happiest places on the planet. At least it is for me. I wrote about it last year, and I don’t think I could … END_OF_DOCUMENT_TOKEN_TO_BE_REPLACED

Ah, back home and time to change gears…and a few other things. I’ll be working on this site for a bit so it will be able to do some things better. But it is probably going to get worse before it gets better, so if something isn’t working right, please check back later.

END_OF_DOCUMENT_TOKEN_TO_BE_REPLACED

I’ve written before about how Penticton has a lot of events and festivals. The most recent event, this past weekend, was more spectacle than festival, but it was really something—an Ironman Triathlon. There were more than 2300 super-athletes from something like 26 different countries (and twice that many staff and volunteers to help with the logistics.) The event is comprised of three elements: swimming, biking and running. The athletes start with a 3.4-mile swim, then bike 112 miles and finish with a 26-mile run. The winner, a Kiwi, finished the course in just over eight and a half hours. The … END_OF_DOCUMENT_TOKEN_TO_BE_REPLACED

I would like to call your attention to a new link over to the right, to my friend Scott Calamar’s blog, “Cynically Sound”, in the “Other Blogs” section. Scott is a musician, writer and former journalist, which perhaps accounts for his sensitive, well-informed, yet jaded outlook on life. He started his blog before I did (and posts more often), but for technical reasons I’ve been unable to link to it before now. At any rate, check it out. You may find it as entertaining as I do.