I’ve written before about how Penticton has a lot of events and festivals. The most recent event, this past weekend, was more spectacle than festival, but it was really something—an Ironman Triathlon. 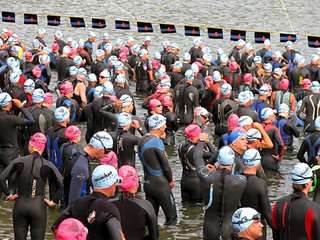 There were more than 2300 super-athletes from something like 26 different countries (and twice that many staff and volunteers to help with the logistics.)

The event is comprised of three elements: swimming, biking and running. The athletes start with a 3.4-mile swim, then bike 112 miles and finish with a 26-mile run. The winner, a Kiwi, finished the course in just over eight and a half hours. The fastest woman, from Australia, came in about a half hour later. (I’m exhausted just describing it!) 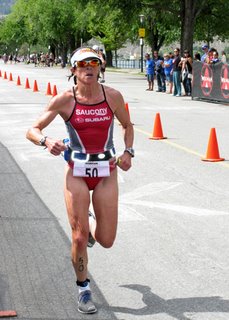 Most others, from professional tri-athletes to semi-serious amateurs took quite a bit longer. There were cyclists still coming in quite a while after the leaders had finished the marathon. I can only imagine how they must have felt knowing that some had finished the race and they still had a 26-mile run ahead of them. According to the rules of the race the time limit is 17 hours. Anybody still racing at that point “will be offered a ride back to the finish line,” as the race instructions graciously note.

Penticton is ideally located for a triathlon, on Lake Okanagan with scenic and moderately mountainous roads in the area for the bike and running parts of the race. There are Ironman Triathlons in various parts of the world. The most famous is in Hawaii, where it all started in 1978. The Penticton event is the only one in Canada.