Well, I guess it is safe to say, New Year’s Eve was a blast. My ears are still ringing. Mike’s extravaganza went off well before midnight, so I was back at my little hotel, up on the rooftop patio when all hell broke loose in town. I was in bed by ten past midnight, and fell asleep to the sounds of fireworks, and someone throwing up in the communal bathroom downstairs. 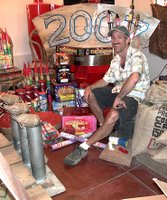 Mike’s coffee shop was closed, but I stopped by in the afternoon to check out the pile of pyrotechnics he had assembled for last night’s show. In addition to several long (100 ft.) rolls of firecrackers, which are lit at one end and explode for several minutes, and bottle rockets that look like they could take down low-flying airplanes, there were some large creations with ominous names such as “Illegal as Hell” and “bin Ladens” (which are “firecrackers” the size of oatmeal cans. Osama only wishes he had that kind of firepower.) 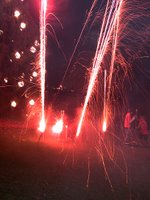 The show itself was like a cross between Dante’s Inferno and a Fellini movie. A crazed cadre of helpers illuminated by showers of fire ran around the lawn of the hotel where the fireworks were planted lighting fuses. No one was injured (except for a few burns), but a nasty accident was averted when one helper unwittingly stepped in front of a bottle rocket just as it took off in the direction of the assembled guests.

We came back to town about 10:30 and I walked through the streets where mostly young revelers were throwing fireworks at cars and each other, and getting drunk in the most exuberant way they could think of. They made me feel old and overly serious (or at least overly sober.)

I retreated to the safety of my little hotel where the family that owns the place and some of the other guests had gathered on the patio above the second floor. A German family passed around sparklers and lit off strings of firecrackers, a couple of young American guys threw bombs onto the roofs below us (they meant for them to explode in the air, but were afraid to hold onto them until the fuse was short enough), and the hotel owner rang a bell during the five minutes leading up to midnight. Around the town hundreds, if not thousands, of dollars went up in smoke.

Then I went to bed.

I had planned on moving on to Quetzaltenango today, but the buses aren’t running. So I’ll hang out here today and go tomorrow. I’m tired of tourists, and it will be a good change of scenery. It has been two years since I’ve seen my godchildren in Quetzaltenango, so I’m looking forward to spending some time with them.