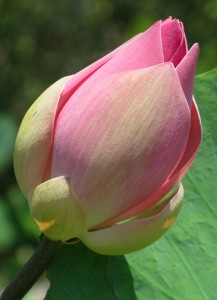 Bali is beautiful. There are some great beaches (and some just OK); terraced rice paddies are postcard pretty; and lush, green forests and spice groves cover much of the interior of the island. But tourism has been a mainstay of the Bali economy for decades, and our challenge has been getting off the beaten path even a little bit, away from the holiday crowd. 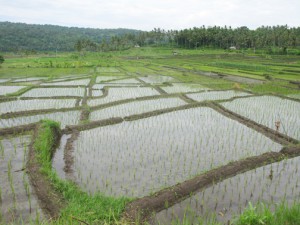 Flooded rice fields in the mountains of Bali.

Before arriving in Bali I knew next to nothing about it. What few preconceptions I had were gleaned mostly from import stores in shopping malls–beachwear, wood carvings and shell jewelry. I don’t think I even knew it was part of Indonesia. But it is one of the more than 17,500 islands that comprise the country. Though Indonesia has the largest Muslim population of any country in the world, Bali is more than 90% Hindu. 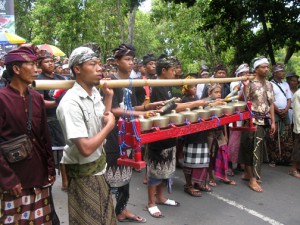 Musicians in a funeral procession commemorating villagers who have died in the past ten years, Munduk, Bali.

Though Hinduism came to Bali two thousand years ago, religious practice today remains mixed with its animist antecedents. For example, our visit to the small mountain town of Munduk coincided with a five-day “cremation” ceremony. In India, the motherland of Hinduism, bodies are burned. But in Bali, while a few are actually burned, most are buried in accordance with animist practice. Shortly after death the family will “plant” the body on a day designated by a religious authority as appropriate. Then later, in a ceremony which occurs only once every ten years or so, friends and family of those who have died will participate in a symbolic group ceremony, such as the one we saw. Nothing was actually burned, but it is called a “cremation.”

Another thing I didn’t know about Bali is that it is a good place to come if you are trying to give up drinking. Taxed at 300% the price of imported liquor is quite sobering. The local concoctions are not very tempting. I wander into the odd liquor store (or “liquor museum” I call them) just to see what is on the shelves.

But I knew there were beaches in Bali, and I knew I had been carrying around a hammock in my pack for two months without any place to hang it. Given a hammock, a beach and a book I could sink into a blissful lethargy for days, maybe longer. Since my birthday was coming up right after we arrived, Faye agreed that the beach would be our first stop.

The first beach we landed at, not far from the airport, was lined with high-end resorts with beaches crowded with overweight European vacationers. I got chased off of the one place I could find to hang my hammock by a security guard who worked for a nearby hotel. Very depressing. So we moved on up the eastern coast, to Amed, and found a much better place, very quiet and with two perfectly spaced trees right next to the sand. 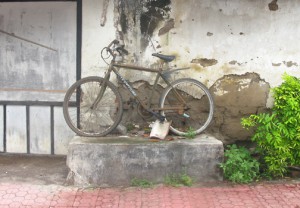 Old bike resting against a wall in a Bali village.

After a few days, which passed way too quickly, we moved inland into the mountains to the cultural capitol of Bali, the town of Ubud. Ubud became famous as an artists enclave in the 30s after several European artists moved to town. One thing led to another, and the place became a tourist haven for those seeking art and culture. In addition to a lot of art–most of it mass produced (though quite good none the less, particularly the wood and stone carving), there are many high-end shops, hotels and restaurants, yoga retreats and meditation centers. 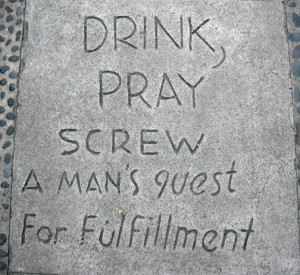 Inscription on a sidewalk in Ubud, Bali

Ubed became famous again with the 2006 publication of the book “Eat Pray Love,” and the 2010 movie of the same name staring Julia Roberts, filmed on location in Ubud. Middle-aged women began flocking to town in search of that Sensitive Someone to replace their pig of an ex-husband, as did the author of the book. Of course, such an earnest book invites cynical responses; there were t-shirts emblazoned with “Eat, Pay, Leave,” as well as an inscription from the male side of the equation immortalized in a concrete sidewalk (see photo at left.)

We are back on the beach for Christmas, this time in the northern coastal town of Lovina. It’s on the touristy side, but it looks like it has seem better days and is attracting tourists with lower expectations. And it is low season now and pretty quiet. We plan to spend our last two nights along the southwestern coast, near the airport, in the surfer town of Kuta. We’ve been warned by several people to avoid Kuta. “It is full of drunken Aussie partiers” they say, like that is a bad thing. We’ll see.

As pleasant as Bali is I think we’ll put it in the “been there, done that” category. I wouldn’t mind exploring other parts of Indonesia though. There are plenty of other islands.

Next week we’ll be in Guatemala, just in time for New Year’s. —-[More photos]

Myanmar isn’t the kind of place you can just go to, enjoy the sights, and leave. You can’t be in the country for any length of time without thinking about social issues, political issues, history and more. It’s not just a trip, it’s an education. And no more so than now, as Myanmar is on the cusp of what promises to be some major changes. At present most changes seem minor, but are significant. There are many new banks functioning and open to the public. Some even have ATM machines, though are only for domestic transactions. (One bank is evidently … END_OF_DOCUMENT_TOKEN_TO_BE_REPLACED

We spent the last week of this trip to Myanmar on the peninsula south of Yangon, bordered by the Andaman Sea on the east and Thailand on the west. The capitol of the area, and Myanmar’s fourth largest city, is Mawlamyine. It is the southernmost place in Myanmar we visited. Coincidently, in addition to Katha, the furthest north we got, it is another place that George Orwell was stationed in his service with the Indian Imperial Police. Mawlamyine (then called Moulmein) served as the capitol of British Burma from 1826-1850. There are still a number of colonial buildings around from … END_OF_DOCUMENT_TOKEN_TO_BE_REPLACED