Get a few drinks into a Latino and he turns into a philosopher and a poet. Of course, after a few more, he turns into an emotional wreck, and/or a really annoying drunk. Sometimes it is a fine line. 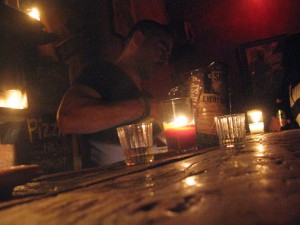 We celebrated New Years Eve in a small, dark, crowded gringo bar Antigua, Guatemala. Having just come more or less directly from Southeast Asia, still dealing with jet lag, for once we felt pretty confidant we would still be wide awake at midnight. The bar was packed mostly with fellow travelers and bohemian expats. There were a few cosmopolitan Guatemalans and midway through the evening I had existential conversations with a couple of them. Well, not conversations exactly. It was so noisy I could only understand bits and pieces of what they were saying. But it didn’t really matter. They spoke with such passion and sincerity I could not help but be moved. I nodded and made the appropriate facial gestures. But I knew such moments are fleeting, and I excused myself from the conversations before they deteriorated, as they always tend to do in these circumstances.

Not all the exchanges were as edifying. Earlier, as the evening was just getting started Faye was talking with a young Guatemalan guy, probably upper middle-class and obviously well educated. He spoke nearly perfect English. The Guatemalans we know are indigenous Mayas, not the hispanic mestizos of the upper classes, and Faye was curious to learn about his perspectives. She asked him what he wanted to do with his life. He said he wanted to move to New York, where it was safer. “Everyday in Guatemala, the young man said, “people are held up at gunpoint for something as small as their cell phone. People should be afraid to die,” he said. “But I am not. I face death every day.”

I don’t know whether he underestimated the dangers of New York, or whether Guatemala is actually a lot more dangerous than I realized. Over the many years we’ve been coming here we’ve always taken sensible precautions and dialed up our situational awareness a couple of notches, but haven’t thought too much more about it. Sure, there have been a few educational incidents that reminded us not to let our guards down, but nothing major (i.e. bullet holes or bleeding). I had always assumed it was pretty normal for a poor country, and part of the adventure of third-world travel. But having just come from SE Asia I realized it’s not a third-world thing–it really is different here…or there. In the countries we just visited–Thailand, Myanmar and Indonesia (Bali)–we felt perfectly safe day or night. In a market in Myanmar we saw large bundles of money on the counter of a jewelry merchant–nobody seemed worried that someone would help themselves, as probably would be the case in other parts of the world, and certainly in Central America.

In SE Asia people seem to go with the flow. In fact, I think they feel they are an integral part of the flow. They seem to almost universally embrace the Buddhist/Hindu idea that ones conduct in this life will have a direct effect on their next life. In Guatemala, and everywhere else in Central America I’ve been, there is no flow to speak of–just the eternal struggle against the constant tide of poverty, corruption and crime. Whatever moral guidance Christianity provides, at least as it is practiced here, it seems to allow some serious shortcomings.

Murder and mayhem are standard fare for the daily newspapers. In the most popular one reports of violence, and photos of grisly accidents, crime scenes and apprehended criminals fill most of the pages. Corruption among police and politicians is endemic. It is actually a sign of progress that two former presidents are under criminal indictment, one for his role in the massacres of the early 80s, and the other for embezzlement and drug charges. The current president is a former general who participated in the massacres of the 80s. He ran on a tough-on-crime platform, which sounded good to a lot of people afraid of daily robberies and murders. (Both presidents now under indictment ran on the same platform.) Another interesting political factoid: out of the five major candidates running for president in the last election, the general was the only one constitutionally qualified to do so. The others ran in spite of being legally barred. 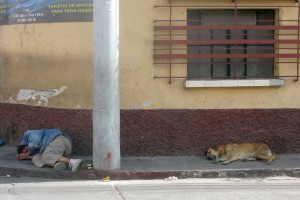 More than a quarter of Guatemalans, and their Central American neighbors, El Salvador and Honduras, live on less than two dollars a day. Certainly two dollars goes further in Central America than it does in North America. But still, that is not much–less than a loaf of bread. Or about the cost of a couple small bottles of potent Guatemalan whisky. I am always puzzled about the economics of the number of men I see passed out on the street. Getting that drunk on a daily basis can’t be cheap. (Drunks were something else we didn’t see in SE Asia, except for Aussie vacationers.)

All that said, on an individual basis, for many life continues to improve. My Guatemalan godchildren are doing well. Even their father, who has worked in the US illegally for the past five years, seems to be doing OK (and has no plans to return). I was told that he had been stopped for speeding, but was not ticketed. That tells me two things: that he has learned to drive, and that he has learned enough English to talk his way out of a speeding ticket. Both of those things are quite an accomplishment. 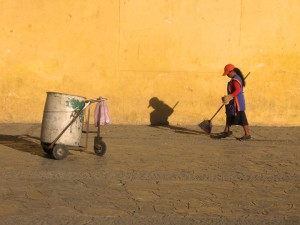 We keep returning to Guatemala mostly because of the kids, and will continue to do so in the years ahead. But the more we travel the longer the list gets of new places we want to see. The challenge is to keep seeing new places and still return to places we especially like, both in Latin America and other parts of the world. One of the places we hope to spend more time in the future is San Cristóbal de las Casas in southern Mexico. It is conveniently located just a few hours travel from where my godchildren live. We stayed a week there midway through this trip Guatemala. San Cristóbal is a vibrant mix of colonial and cosmopolitan, bohemian and indigenous Maya. We spent mornings sipping hot drinks and reading our books in an airy colonial patio, afternoons exploring the neighborhoods and markets, and evenings in cafes and bars listening to live music. It is the kind of place that gets you looking at real estate prices.

This is about it for this year’s trip. It is hard to believe we’ve been gone four months; we’ve just a few more days, then it’s back home…for a while.