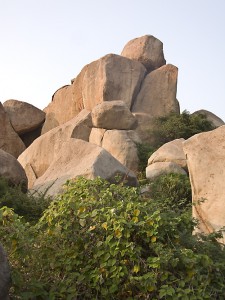 A formation of giant boulders in Hampi.

I understand that feeling, not just in regards to Goa but nearly any beach. When it was finally time to move on we weren’t sure whether we had spent too much time in Goa, or not enough. Maybe both. In any case, we stopped in at a travel agent and bought tickets on a sleeper bus to take us away from the beach on an overnight trip to Hampi, a city of temples and stones.

A night on a sleeper bus is no picnic, but it is not too bad if you can get a nice air-conditioned bus with berths where at least you can stretch out. To our dismay the bus we got was not the bus we expected, but a real beater. And when we got on the bus we were put into seats, not a sleeper berth. My seat was broken and the back kept drifting into the lap of the person behind me. It was not a good night. But it passed, and we pulled into the surreal landscape of Hampi in the morning. 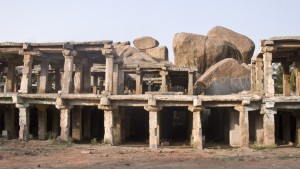 Centuries-old market stalls made of stone columns and slabs, in Hampi.

In a place with a lot of trees, things are built of wood. In Hampi there is an endless supply of giant boulders the size of a car or a house. It is beautiful in an alien sort of way. The architects of Hampi chipped and carved the boulders into some 1600 temples of varying degrees of artistry, a large market bazaar comprised of a hive of traders’ stalls, an elevated aqueduct, and a king’s palace. There are even stone fenceposts around nearby pastures, but of a more recent vintage, I’m sure.

Hampi flourished as the center of an empire from the mid-14th century until the mid-16th century when it was sacked by the army of a Muslim sultan who ruled the area to the north. Hampi was virtually abandoned for centuries afterwards, until it was rediscovered by the British in the 19th century.

In 2012 Hampi was dealt another blow, this time by well-meaning conservationists. A small village had grown up to service the thousands of tourists and pilgrims who came to visit the temples, and for decades vendors operated stalls in a similar manner as the traders of hundreds of years before. In 1982 UNESCO declared Hampi a World Heritage Site. A degree of protection was extended to the ruins, but sometimes the past and present collide. In 2012 government conservationists bulldozed stalls and houses belonging to hundreds of vendors close to some of the ruins at the edge of the village. 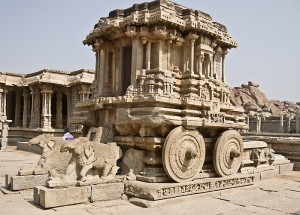 Carved stone shrine in the form of a chariot, Hampi.

The bulldozers certainly weren’t as destructive as the invading Muslim army, but the life of the village was damaged, as well as the lives of quite a few vendors and their families. One resident said, referring to the village, “Hampi used to be interesting. Now it is boring.” In spite of the impressive temples and other monuments, and the even more impressive giant boulders (in my opinion anyway), I had to agree. Hampi seemed a little boring.

A thought that kept recurring to me is how labor intensive and time consuming spiritual devotion is. Lord knows even for the secular traveler temple tourism can take up a lot of time. I think I am ready for something else.

More pictures in the gallery, [here].