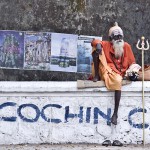 Due to my trouble with time and space (i.e. reading calendars and maps) I decided we needed to get from Hampi to the coast as soon as possible, near where we soon would be catching a train to take us up to northern India. So, instead of taking our time and sightseeing along the way, we arranged to go more or less directly from Hampi to Fort Kochi in the southern state of Kerala. We spent two consecutive nights on public transportation—the first on a train and the second on a bus. I don’t know what I was thinking, but it seemed like a good idea at the time. 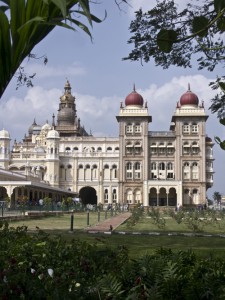 In between the train and the bus we had a few daytime hours in the city of Mysore, which definitely merited more time than we gave it. We did get to tour the landmark Mysore Palace. I don’t think I had ever been in an actual palace before, and I realized I had been using the word “palatial” all wrong. The splendor, the grandeur and the sheer magnificence of the place was something I have never seen. I know, we’re in India, a country that is known for over-the-top palaces, so I understand there may be even more impressive palaces to come. Fine. I’ve had enough temples, but I’m just getting started with palaces.

When we got to Fort Kochi I realized we still had ten days left before our train trip north. The general consensus seems to be that ten days is about a week longer than strictly necessary. It’s true, one could probably do all the things people come to Fort Kochi to do in two or three days. But we felt like we had recently spent too much time getting from one place to another, so we decided to take our time and maybe discover some subtler things that the perpetual motion travelers miss. 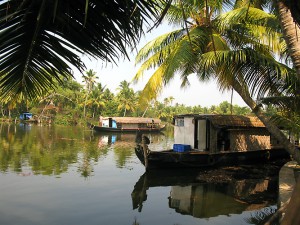 Houseboats for touring backwaters of Kerala.

One of the popular tourist activities along the Kerala coast, mostly around the town of Alleppy, is taking a backwater tour in a houseboat. The houseboats are converted cargo boats, repurposed with the addition of bedrooms, bathrooms and kitchens. Some are quite nice. The backwaters are canals and channels that link small lakes and villages. Inevitably, I guess, the area is called “the Venice of India.” But that is like calling some building “the Taj Mahal of Cleveland.” 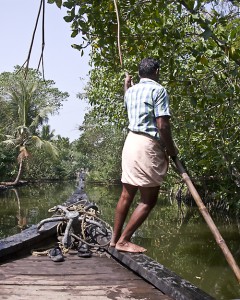 A boatman pushes a houseboat along a backwater canal in Kerala.

Depending on the boat, luxury overnight tours can cost more than $300. We settled for a budget backwater tour at a third the price, but it turned out to be more like the aquatic equivalent of a back alley tour. It is amazing how much trash people living along canals throw over their back wall. Most boats are motorized, but ours was propelled by two guys with poles. We didn’t go fast or far, but it was nice gliding along in relative quiet. And we had the smug satisfaction of knowing our carbon footprint was smaller than those on the luxury tours.

With plenty of time left on our hands, we wandered the back streets of Fort Kochi, looking into shops and admiring the fruit and vegetable markets. We sampled a different restaurant every evening. We took a cooking class. (On a side note: we haven’t lost any weight at all since coming to India.) Though we are skimming the surface of most places we go in India on this trip, we have given Fort Kochi its due.

Let’s move on to the educational portion of this post: It seems pretty much anywhere in India has an interesting history, but the Malabar Coast—from the state of Goa down through coastal Karnataka and Kerala to the tip of the continent—is unique. The Malabar Coast has long been famous for its spices. Because of its location on the Arabian Sea, foreign merchants have been visiting coastal ports such as Kochi for thousands of years, and many have stayed, bringing with them their own cultures and religions.

Though some doubt it, legend has it that St. Thomas, the disciple of Christ, came to India, near Kochi, in 52 AD, just decades after the crucifixion, and that some of his early converts were Jews already living along the coast. Today there are at least eight Christian sects in southern India who trace their heritage back to St. Thomas, all with intricate liturgies. The folks back home who like to clap and stomp for “that old time religion” should come check out the Saint Thomas Christians, as they are called. 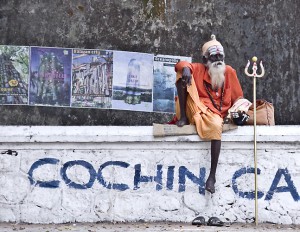 A Sadhu rests on a wall in Cochin.

Some Jews may have migrated to the Malabar Coast as early as the reign of King Solomon, nearly 1000 BC. A larger group came to Kerala in 72 AD following the destruction of the second temple in Jerusalem by Romans. In the centuries following more Jews came from other parts of the world and a Jewish community thrived from around 400 AD in an area 50 kilometers north of Kochi. In 1568 the community moved to Kochi to land they were given and built a synagogue, which survives and is still functional. However today only a handful of Jews remain in the area (one reportedly is over 100 years old). Most have emigrated to Israel, retracing the steps of their ancestors.

Several European colonial powers have also left indelible marks on the Malabar Coast, beginning with the Portuguese in the 16th century. The Portuguese were followed by the Dutch, the French, and most significantly the British. Britain began trading in India in the 17th century, and by the 19th century it had consolidated its rule over India and beyond. The British were finally forced out of India in 1947, when India declared its independence, but foreign cultural influences remain a significant part of the flavor of Kerala and the Malabar Coast. 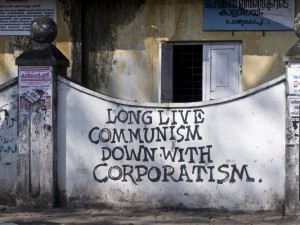 Pro-Communist slogan on a wall in Fort Kochi, Kerala.

As if all of that wasn’t enough to make Kerala unique, in 1957 the people of the state were the first in the world to democratically elect a Communist government. The Communists have been in and out of power since then, but Kerala has remained socialistic, with an emphasis on labor rights, health and education. Kerala has the highest literacy rate and one of the lowest poverty rates in all of India.

That’s about it for laid back southern India, or at least the small sliver of it that we’ve seen. The next part of our trip will begin in a few hours with a 46-hour train ride north to Rajasthan—1787 miles. There is a lot to see and do there, and we already have almost all our train trips booked. There will be no more lallygagging for the duration.

As always, more pictures in the gallery [here].