We have settled in a place we hope we can call home for the foreseeable future–Salt Spring Island, off the southeast end of Vancouver Island, British Columbia. I’ve lived in some nice places over the years, but this may be the most beautiful. 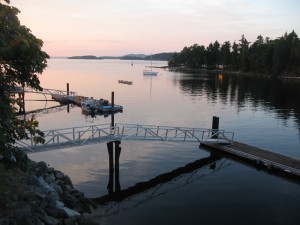 The view at sunset from our (rented) property.

We’ve rented a small guest house on a property next to a small bay, and just a few steps from the northern tip of the island. On sunny evenings we can look out over the ocean, past small neighboring islands and watch the sun go down behind Vancouver Island. Pretty nice. 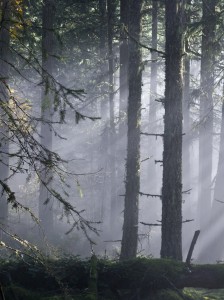 Sunlight filters through trees and fog in the forest.

Salt Spring is almost entirely rural, mostly forested with plenty of pastures and meadows, some mountain peaks and a few lakes. It is a smallish island, maybe 25 miles long, with about 10,000 people, many with strong feelings about one thing or another. An often-quoted local resident (Famous Canadian Folksinger, Valdy) calls Salt Spring Island “a difference of opinion surrounded by water.”

That can be a bad thing, but I think it is an indication of the kind of passionate and intellectually active people who live on the island. Someone told us that there are more Ph.Ds here per capita than any other place in the country. There are also many retired professionals, artists, old hippies and American draft dodgers, and a handful of aging rock stars. It is an interesting mix. 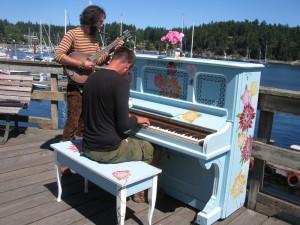 During the summer several brightly painted pianos were placed around town for anyone to play.

We had some reservations about living on a small island, but so far it feels cozy rather than claustrophobic. There has been plenty to do. In the two months or so we’ve been here we’ve been to a country fair, a gay pride parade, a couple very good jazz performances and several art openings, to name a few things.

Something I’ve found particularly appealing is the number of little unattended stands at the ends of driveways selling free-range eggs, baked goods, flowers and more, as well as organic produce from the numerous farms on the island. There is something comforting about buying food from the people who grew it, and eggs from chickens you can see running around the farm. 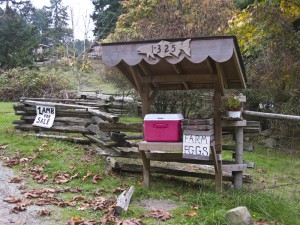 Summers are busy during the tourist season, but we’ve heard from some locals that winter gets long and tedious. Others look forward to the quiet time. We’ll be going away to someplace warm and sunny for part of the winter, as usual, so that will help.

I’ve posted a few pictures [here]. I’ll add more from time to time, which you can see by going to the menu above and clicking on Photos>Canada>Salt Spring Island.